HTFSE – All You Need to Know About Full-Flavoured Extracts 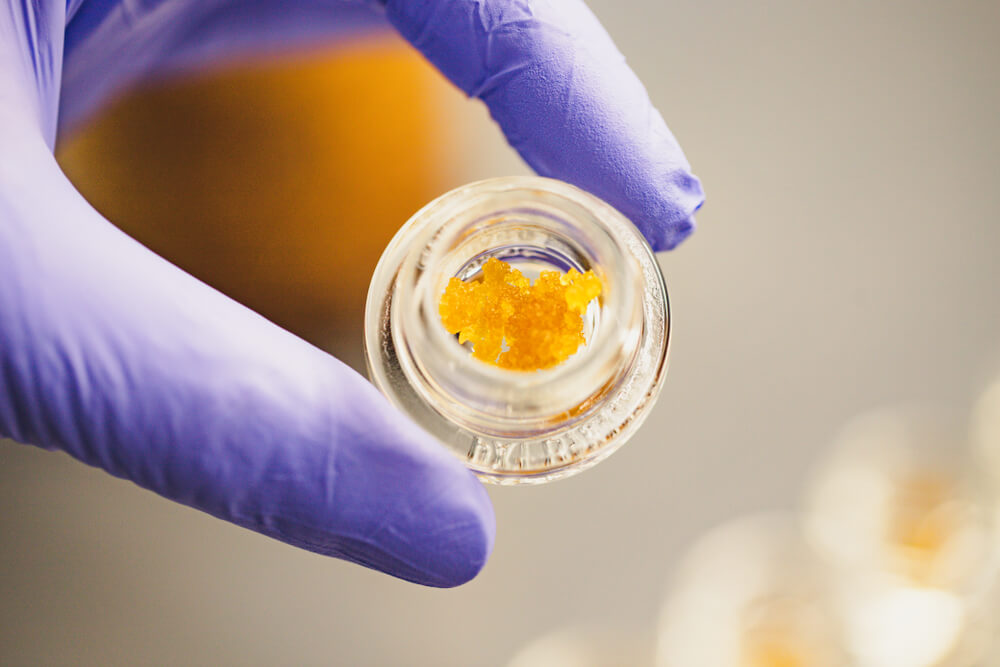 There are countless acronyms to remember in the wonderful world of weed, including THC vs CBD, BHO, and HTFSE. It’s like its own delightfully potent bowl of stoner alphabet soup!

While the first couple of examples are more recognizable and easy to decipher, the term HTFSE will likely leave many tokers scratching their heads trying to figure it out. Don’t worry. We’re here to help!

While BHO, or butane hash oil, cannabis extracts were once a revolutionary invention, extraction techniques have become more innovative and progressive since the legalization of medicinal and recreational weed.

As such, cannabis creators have had more flexibility to experiment with utilizing different methods, including lower temperatures and full-spectrum extractions, to manufacture products higher in terpenes or cannabinoids.

When it comes to HTFSE, gone are the days where you had to sacrifice flavour for potency.

Now, you can have it all!

Today, we’ll be breaking down all you need to know about HTFSE, including what it is, what makes these products unique, and the differences between cannabinoids and terpenes.

What is HTFSE? What Does it Mean? 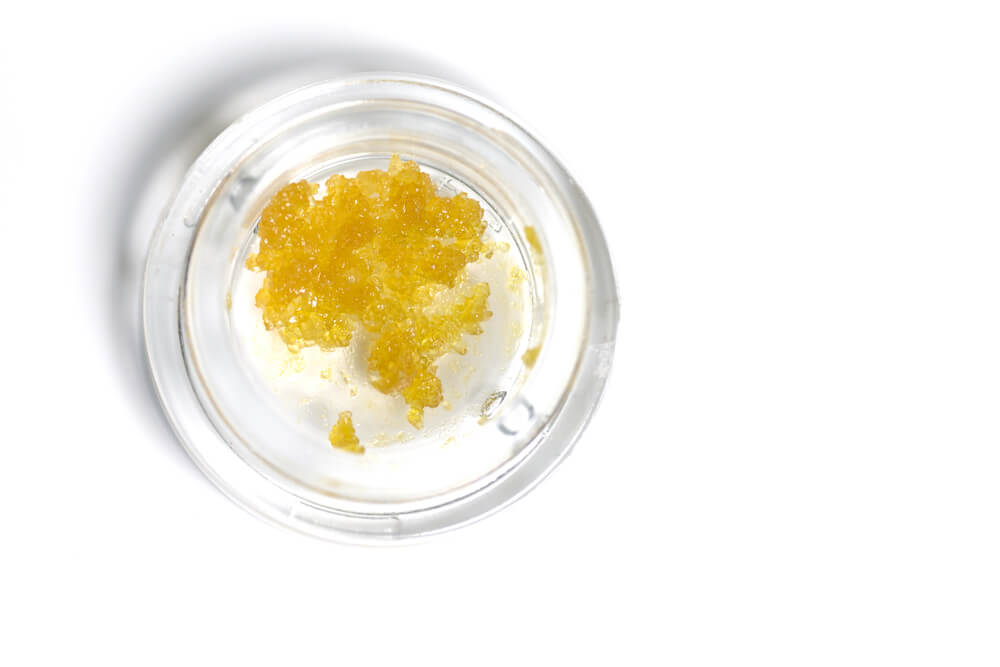 HTFSE stands for high terpene full-spectrum extract. These products are full-spectrum concentrated cannabis extracts. Full-spectrum simply means that they are packed full of terpenes, flavonoids and cannabinoids, unlike other extracts that solely focus on one compound.

Although the product itself does not reflect the same stunning aesthetic as a regular cannabis plant, there are fewer ways to enjoy the buds as they were naturally intended as authentically as HTFSE.

This contrast also directly impacts the extract’s appearance, with HCFSE looking like diamonds, as it has a 90% THCA content. In comparison, HTFSE will have a more honey-like consistency because HTFSE contains between 13 and 25% terpenes.

Even though HCFSE will have a higher concentration of THCA, some high-quality HTFSE can still have upwards of 50% THCA. The laboratory process used to create these products, which we’ll outline later on, also accounts for their different consistencies.

Basically, HTFSE is the sticky sauce that is left over after the THCA diamonds, also known as THC diamonds, are removed.

If you’re wondering what THCA is, it’s the precursor to the psychoactive effects of THC. In other words, it is a cannabinoid that is structurally very similar to THC, except it has an additional carbon monoxide molecule.

The primary difference between THC and THCA is that THCA is non-psychoactive, meaning that it won’t get you high. It’s through decarboxylation when weed is exposed to heat that THCA is converted into THC and produces its effects most commonly associated with a ‘high.’

A simple trick for determining whether something is full-spectrum or not is looking at the label. If you see that it claims to be “strain-specific,” it is not a full-spectrum product. These products are distillates.

The appeal of HTFSE and HCFSE products lies in the synergistic effects that they possess. What makes HTFSE so appealing is the unique and powerful aroma it possesses, which will vary depending on which terpenes it contains.

So, while some products may transport you to a fresh pine forest, others may wash over you with a wave of delightful citrus that will make you feel like you’re far away on a tropical beach somewhere.

Cannabinoids vs Terpenes – What’s the Difference? 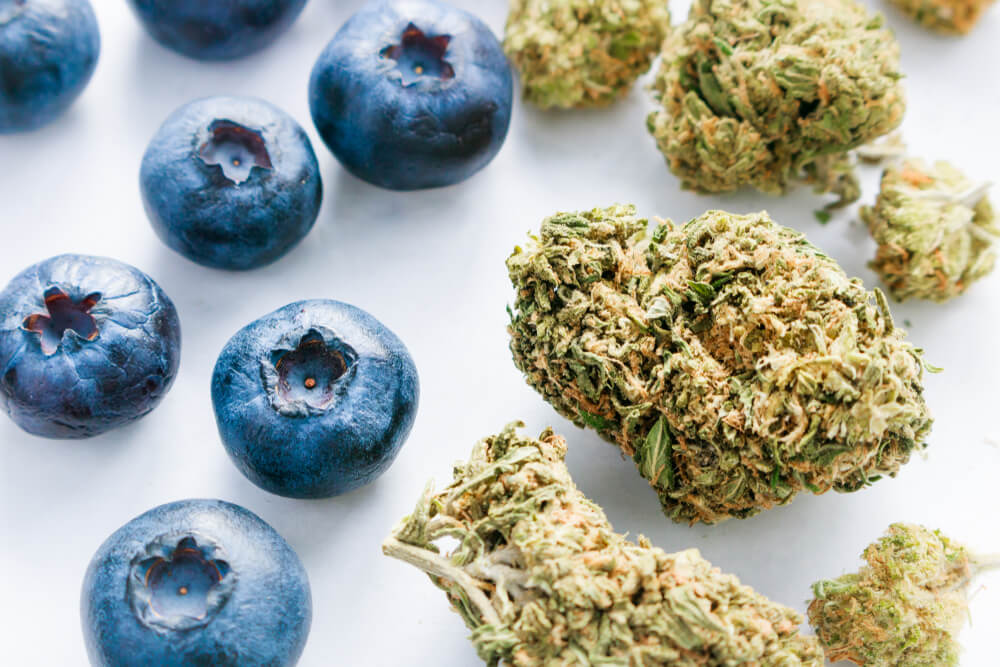 We’re glad you asked! This difference is very significant and important.

Cannabinoids, also known by their full name, phytocannabinoids, are the compounds of the cannabis plant that interact directly with our body’s endocannabinoid system to produce their effects. The most common cannabinoids that tokers will be aware of are THC and CBD.

However, those are just two of over 100 different cannabinoids present in the weed plant.

On the other end, terpenes are the aroma-producing compounds that are present in a variety of different plants. They serve a protective role on top of their fragrance-producing properties. Similar to cannabinoids, there is a vast amount of terpenes present in cannabis plant material.

So, it is terpenes that produce the various scents that are found within cannabis buds. The combination of both these crucial components develops the unique chemical profiles that differentiate various weed strains.

These elements working in tandem to produce the numerous recreational and therapeutic effects associated with your favourite bud creates a phenomenon known as the Entourage Effect.

What Makes HTFSE so Special?

To determine why high terpene full-spectrum products are so unique, we need to delve into why terpenes are so critical and why they matter in the first place.

Essentially, many blazers will notice when they are consuming a low-terpene concentrate or extract, such as shatter or distillate. While the high is intense, it doesn’t last.

In other words, these highly concentrated cannabinoid extracts will for sure get you super duper high in terms of potency, but their effects will likely be short-lived.

Even when smoking regular flowers, you’ll likely notice a significant difference in the overall high you’ll experience. This distinction is because natural weed buds contain terpenes, while these high cannabinoid extracts don’t.

Terpenes play a crucial role in the general high experience. While their contribution may be subtle, they provide a more comprehensive and well-rounded aroma and flavour profile that makes a world of difference. Not to mention the vast healing benefits that they provide in their own right.

While they may not have a significant part to play on their own, it’s when they work together with the other compounds present in weed, including cannabinoids THC and CBD, that they truly shine the brightest.

HTFSE products have the full range of terpene and cannabinoids through being full-spectrum extracts, so they provide an exceptional flavour on top of medicinal benefits. In this sense, they are greater than the sum of their parts.

How is HTFSE Made? 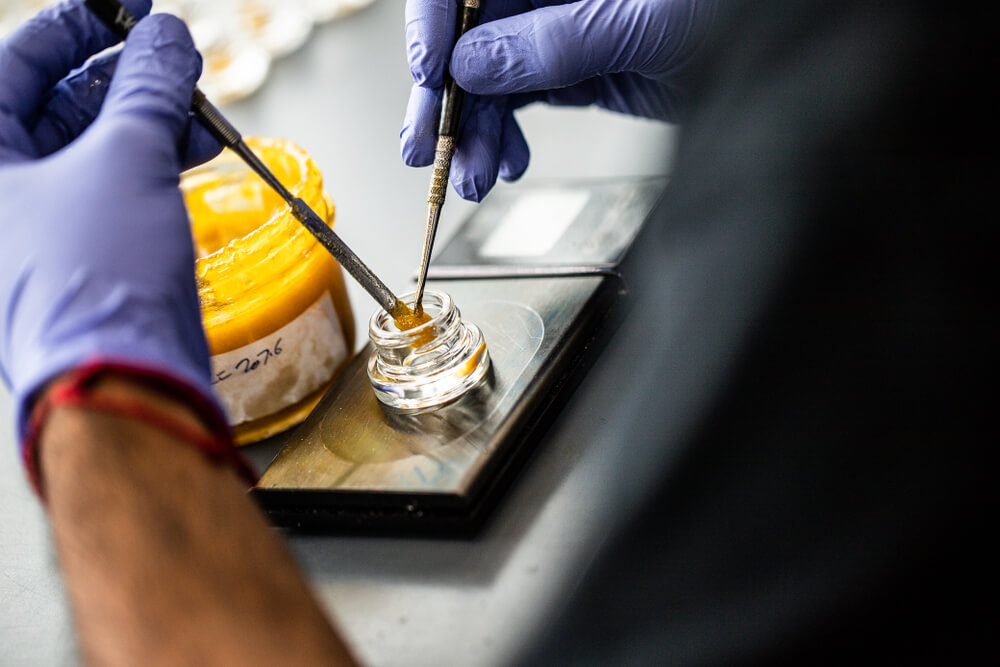 Unfortunately, unlike other cannabis extracts that you can make at home, HTFSE requires specialized equipment and expertise to be produced.

The extraction method to create HTFSE can be broken down into four components:

Since HTFSE works to preserve the natural cannabinoids and terpene profiles of the plant, starting with a high-quality flower is vital for the final product’s overall quality. This fact is why many producers opt for using premium flash-frozen cannabis flowers as their starting material.

Throughout the primary extraction, producers maintain low temperatures to preserve the frozen plant material’s sensitive and volatile compounds. During this initial phase, the extraction also removes the wax and other non-valuable components from the extract, including fats and lipids.

They can do this easily using sub-zero temperatures.

Secondly, they will gradually introduce low heat into the process to separate the solvent from the concentrate. This step is where the solvent choice comes into play, as its boiling point must be low enough to protect the valuable terpenes and cannabinoids in the sauce.

While there are lots of high terpene full spectrum extracts out there, there really isn’t a standard or governing body to dictate what is an HTFSE and what isn’t.

Basically, producers can say that their products are a high terpene full spectrum if they feel that the terpene count is greater than the cannabinoid count. Making such a claim isn’t inherently misleading, but it does cast some doubt. 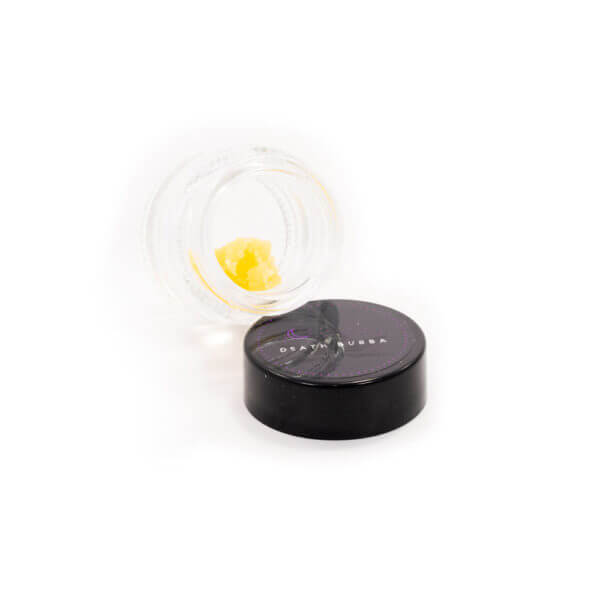 This curiously named concentrate isn’t really alive, but you might think it is once you get a taste!

Made with flash-frozen cannabis buds, live resin stands at the forefront of tasty dabs. Compared to regular BHO concentrates which use dried and cured weed in their production, live resin flash-freezes the bud before it’s processed into live resin.

The result? A cannabis concentrate that’s packed with flavour and terpenes. ‘

If you want to learn more about this terpy concentrate, be sure to check out our “what is live resin” guide for the full story!

No, they aren’t weed crystals, but their appearance looks exactly like one. Also known as THC crystalline, THC diamonds aren’t really a high terpene full spectrum extract on their own, but they are when they’re left to stew in their own terp sauce!

You can’t eat this sauce on its own and it really isn’t a “sauce” to begin with, but it is from this mixture that THC diamonds are derived from.

Basically, THC diamonds are formed when the THCA is allowed to crystallize from a terp sauce solution. THCA is similar to THC, but won’t get you high. THCA is present in regular weed flowers, and when it’s exposed to heat like through a joint, bong, or vape, the THCA transforms into THC! 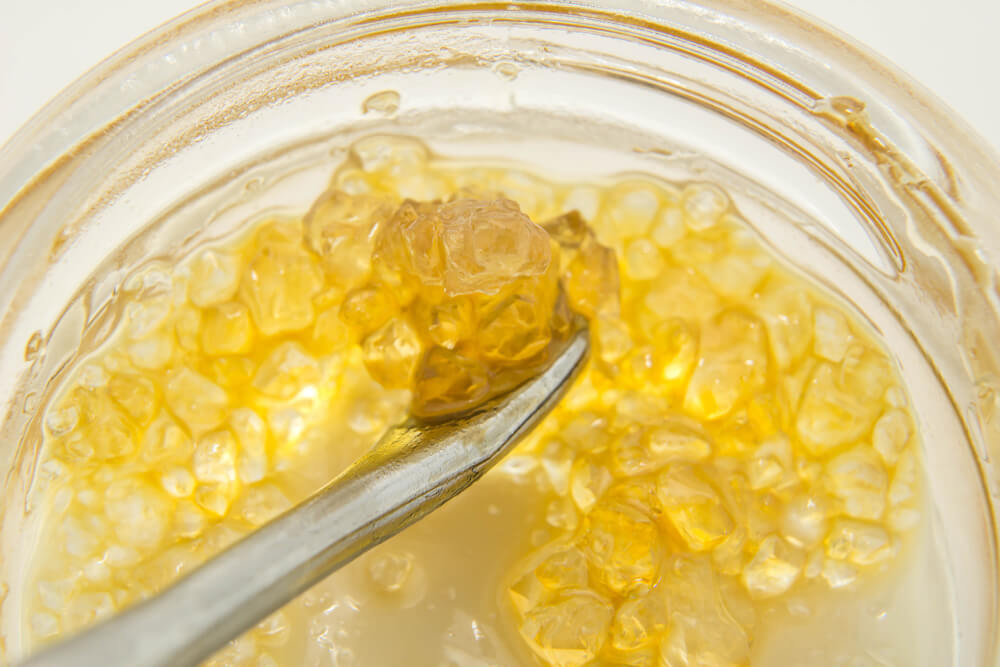 Terp sauce is an advanced cannabis concentrate and one that most accurately fits the HTFSE category. You can tell from the name alone that this concentrate focuses heavily on terpenes.

Incredibly flavorful and delicious, terp sauce is made from live resin and not cannabis flower like most cannabis concentrates. For the lack of a better term, live resin is allowed to “age” under special conditions and once a certain amount of time has passed, the THCA (also known as THC diamonds) starts to separate from the terpene mixture.

Once you remove the THC diamonds, you’ll have yourself a jar of fresh and terpy terp sauce!

How to Use HTFSE

Due to its malleable consistency, the most common method of using HTFSE is dabbing using a dab rig. This method ensures that you can control the temperature and avoid spoiling the extract’s complex terpene profile.

While it is possible to consume it in a joint or a bowl, you may end up burning off the terpenes, creating a harsh and unfavourable flavour. Similarly, if you were to try to incorporate it into edibles, the high temperatures necessary for baking may lose some of the valuable terpenes that high terpene full-spectrum products vie to preserve.

In this way, dabbing tools such as a dab nail allow more precise temperature control to preserve these terpenes in all their glory.

HTFSE – The Benefits of Going Full-Spectrum

While there are benefits to honing in on the healing properties of CBD and the recreational experience of THC, there are other elements of the plant material that are also well worth exploring and appreciating.

Terpenes provide a robust component to your cannabis experience that will only supply a more encompassing high.

One toke of a high terpene full-spectrum extract, and you’ll see exactly what we mean. It will open your eyes to the vast world of potential complete with complex and diverse aromas and flavours that will inspire you to dive deeper into this realm of possibilities.

While these products may be a bit pricier due to the intensive extraction process necessary to create them, we would highly recommend that stoners splurge, even just once, to experience the difference of a terpene full-spectrum extract for themselves.