How to Ensure Your First Edibles Experience is Great

In the world of cannabis, we define “Edibles” as marijuana-infused products that we can ingest, anything from candies to tinctures to cannabutter. Edibles also make up a large portion of the medical marijuana market, and for good reason. Let’s look at some of the reasons why a medical marijuana patient would want to use an edible instead of smoking the herb:

Edibles come in a wide range of shapes, sizes, and strengths. With all this said, it’s not surprising that many people prefer edibles over other methods of cannabis consumption.

However, when using cannabis, for reasons of health or recreation, the edibles experience is really a completely different ballgame. For one, as we mentioned above, the effects are long-lasting. While smoking a joint may keep you high and enjoying the effects of the cannabinoids for a few hours, an edibles experience might last a good part of your day. Additionally, most people will agree that the effects are much stronger as well.

The world of edibles is massive and ever expanding. So let’s delve into all the details so that your very first edibles experience is everything you wanted.

Differences Between Edibles and Smoking 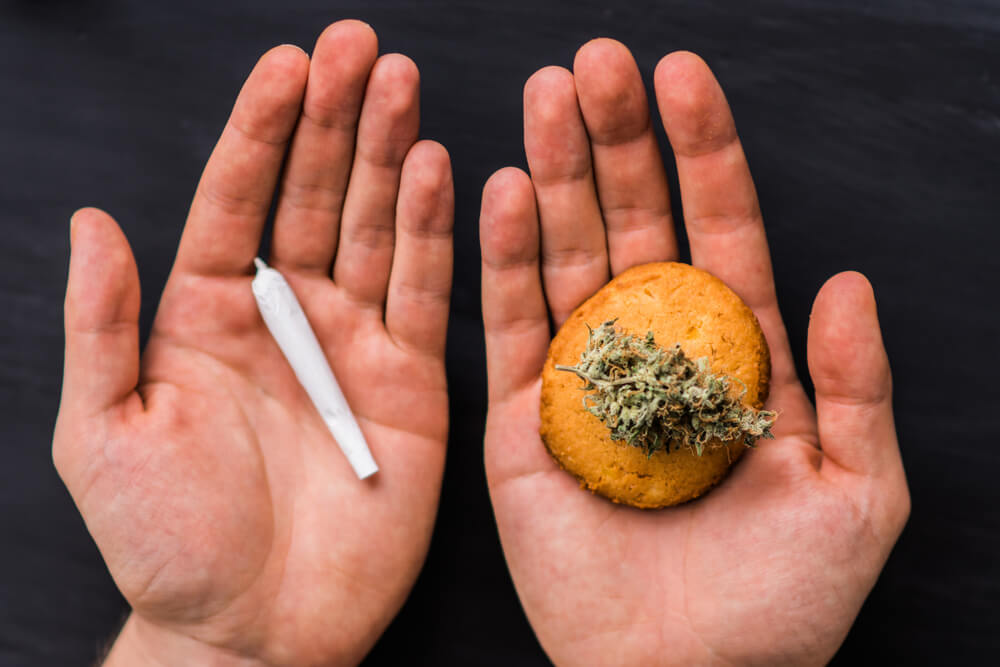 Edibles come in an extremely varied and diverse range of products, giving the marijuana patient many options to choose from. There is the typical “Pot Brownie” made famous in popular media, plus candies, chips, pizzas, drinks, supplements, and many more cannabis-infused items.

Edibles affect the body very differently than smoking does, providing effects that for some individuals, can be more beneficial than what they would experience from smoking. According to leafly.com, “When you consume cannabis in an ingestible form, its THC is metabolized by the liver, which converts it to 11-hydroxy-THC. This active metabolite is particularly effective in crossing the blood-brain barrier, resulting in a more intense high.

Inhaled THC, on the other hand, undergoes a different metabolic process. This is because rather than passing through the stomach and then the liver, the THC travels directly to the brain. This is why the effects of smoked or vaporized cannabis come on faster but diminish more quickly. This difference in the way that the THC is metabolized makes a big difference in the end.

Not only is the effect of the THC felt much stronger, but the duration of the effect, depending on how much was consumed, can last far longer than the duration of inhalation. With edibles, assuming you are consuming safe and professionally made products, you know exactly how much THC you are consuming. Oftentimes, such packages even give instructions and dosage information so you know just how much you are getting. This is important considering how edibles work.

When you smoke, you feel the effects instantly, or very quickly. However, when you consume an edible, it can take up to an hour or sometimes longer before you feel the effects. Due to this, many people who are having their first edibles experience end up consuming far too much. Because unlike smoked marijuana, they have to wait a while for the effects. As a result, they may feel that it is not working, due to how long it is taking.

This is actually a common and sometimes dangerous mistake to make on the first edibles experience. Because people might feel compelled to take more edibles since they feel what they’ve already taken is not enough. If they end up getting a double dose they could be in for an edibles experience not to their liking.

Some people who have ingested more than the recommended amount because of this have experienced a high so strong they felt the need to just go to sleep. Often a high of this strength will also last throughout the day, or evening, depending on when taken. Not only that, the effects are often much stronger than these people ever anticipated!

Within the cannabis community, there are many tales that get “passed around the fire.” One of those is often what happens the first time during someone’s first edibles experience. Sometimes it has even led to some comical situations. As we all know, there is no statistical evidence to support the idea that anyone has ever overdosed on THC. Please keep that in mind as you read the following accounts, and in some cases, experience the fear and joy of some of these individuals! The names of those below have been changed for their protection.

“The first time I had an edible, it was November 1982 and I was about to go to my parents’ house for Thanksgiving. I had just finished hanging out with my friends at the local movie theater. On my way home (I was being taken home by a friend, I was 19 at the time, and with no car) my friend wanted to stop at his house really quick to grab something. He didn’t tell me what, but I told him that was fine. So we made our way the short distance to his house. After running into the house really quick, he came back outside holding a small paper bag, I had no idea what was in it, or what was about to happen. I had smoked before, a few joints with my friends when we could, or when anyone had anything.

But I had never had an edibles experience before. Sure enough, he pulled out a large, dark brown brownie out of the paper bag. “I got this from my brother,” he said. When I asked him where his brother got it from, he just shrugged. We both had always talked about how we wanted to try one sometime. We had heard about it, but now we finally could.

Sure enough, we ate the entire thing, I had about three-fourths of it, and he had the rest. He didn’t like the taste so he let me have most of it. About an hour and a half later, my face was head down in my mashed potatoes at dinner and everyone wondered what the hell was wrong with me. They left me there and I woke up the next day with crusty food all over my face and the family mad at me. My advice?

“The first time I had an edible was about a year ago. I had just gotten my medical marijuana card, near my eighteenth birthday (being a California Resident). I was excited to try out some new things.

Being in California, I had tried marijuana a handful of times, but it was only via smoking. So I was excited to head to the dispensary and try something new.

I got an ‘Irish Mint” 100 mg Kiva Bar and it was a great decision! The taste was wonderful and the effect was great! It kicked in after about an hour, and the effect lasted for about six! Peaking around two hours in, it had a really strong kick! It was pleasant and I felt like I was floating on clouds! Soon, the effect began to fade and I took the most amazing nap! I did only eat about half of it, leaving the other half for another time.

It was a great experience, and I highly recommend it!”

Although I had tried a few edible brownies that I’d made during my college years, I honestly was in such a haze back then I don’t remember that first experience. Years later, after I’d settled down a bit and had been smoking regularly for quite a while, I began to worry a bit about the smoke. So I decided to try making edibles again.

But this time I was vegan and so I wanted to make a vegan edible. I also wanted to make sure I did it properly this time instead of just pulling a recipe out of my hat. So I got on YouTube and did some reading up on it as well. Then I proceeded to make some luscious vegan, carob-coconut fudge bars.

Because I was such a seasoned marijuana user at this point, I kind of shrugged off what I’d heard about the stronger effects. So after eating a few small bites of the bars, I waited. But after half an hour I thought, well, maybe I need to take more. Damn, they were tasty. So I had a few more.

My big error in judgment

And that’s what I considered to be my big mistake. Because I’m a busy person and by ingesting far too much, I was basically incapable of doing all the things I needed to do that day. Didn’t want to leave the house or talk to anybody, that’s how high I was. Finally, I just put myself to bed. Another thing I noticed was the extreme thirst or cottonmouth. Previously, I’d thought it had to do with the drying effects of the smoke. Nope. One good thing though, when I did wake up, I actually felt pretty great.

Since that first memorable edibles experience, I’ve made them several times and have learned to be more patient and wait at least an hour or more to enjoy the super and long-lasting effects of a normal dose.

I also think of the whole edibles experience of a way to unplug and have an ‘escape day.’ So I try to plan something fun like a day at the beach or a long walk in the woods. It really is an incredible high.”

“My first edibles experience was pretty standard as far as I know. I was just hanging out with some friends at a party. We had been smoking, etc. and someone brought out some gummy worms. I had no idea that you could even do that! Well, we chowed down on a few bags of them, having no idea how much weed we were really getting.

Luckily, it was sativa and we had one hell of a night! It was very, very strong. There were no bad side effects, and when we woke up the next morning, we felt great!”

Making Sure to do it Right

As one can probably discern from the above accounts, the first time you have an edible can really vary in terms of how well the edibles experience goes. We can take a few key pieces of advice from those that have gone before, and learn from them!

There are responsible ways in which to use edibles so that they are not only safe but effective. You want to try to make sure you know what you are eating and be in a safe place to do so. Edibles vary greatly in strength, and it is always wise to know what you are putting into your body! Keeping all of that in mind, you can have a great edibles experience.

Visit this page to see all the available cannabis edibles.

How to Make Cannabis Edibles: A Guide for the Novice

THC Lean – What You Need to Know About Cannalean

How Long For Edibles to Kick In? 3 Things to Consider