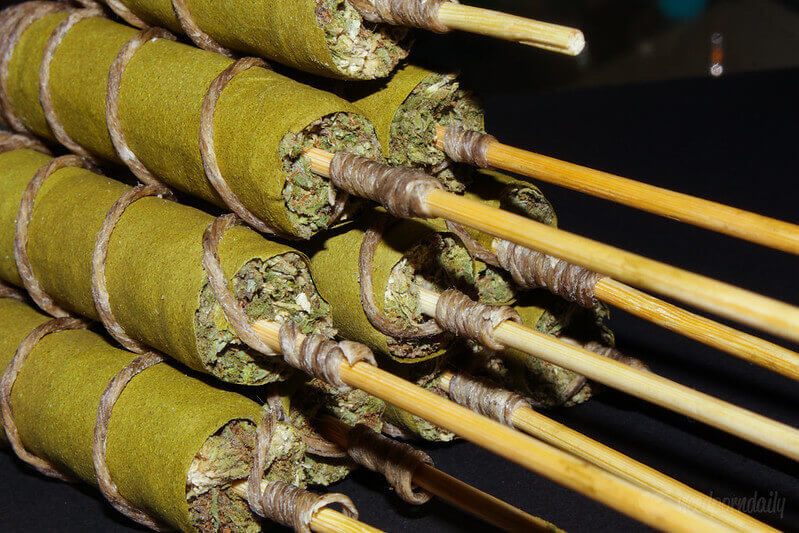 The benefits of cannabis have been celebrated for centuries, with Thai Sticks being just one of many innovations developed in its rich and fascinating history.

Ever since cannabis first hit American shores hundreds of years ago, we’ve happily learned about and adopted the many marijuana methodologies of other cultures and nations.

With that, one of the most potent but unusual looking inventions to come our way has been the Thai Stick.

As you may have picked up, Thai Sticks hail from Thailand. However, if you’ve never been, there’s a good chance you’ve never had the opportunity to try one out.

There is also a Thai Stick weed strain, which we will discuss later, but this article’s meat and potatoes will focus on actual Thai Sticks made in Thailand and how you can make and enjoy your own without leaving the country!

What Is a Thai Stick? 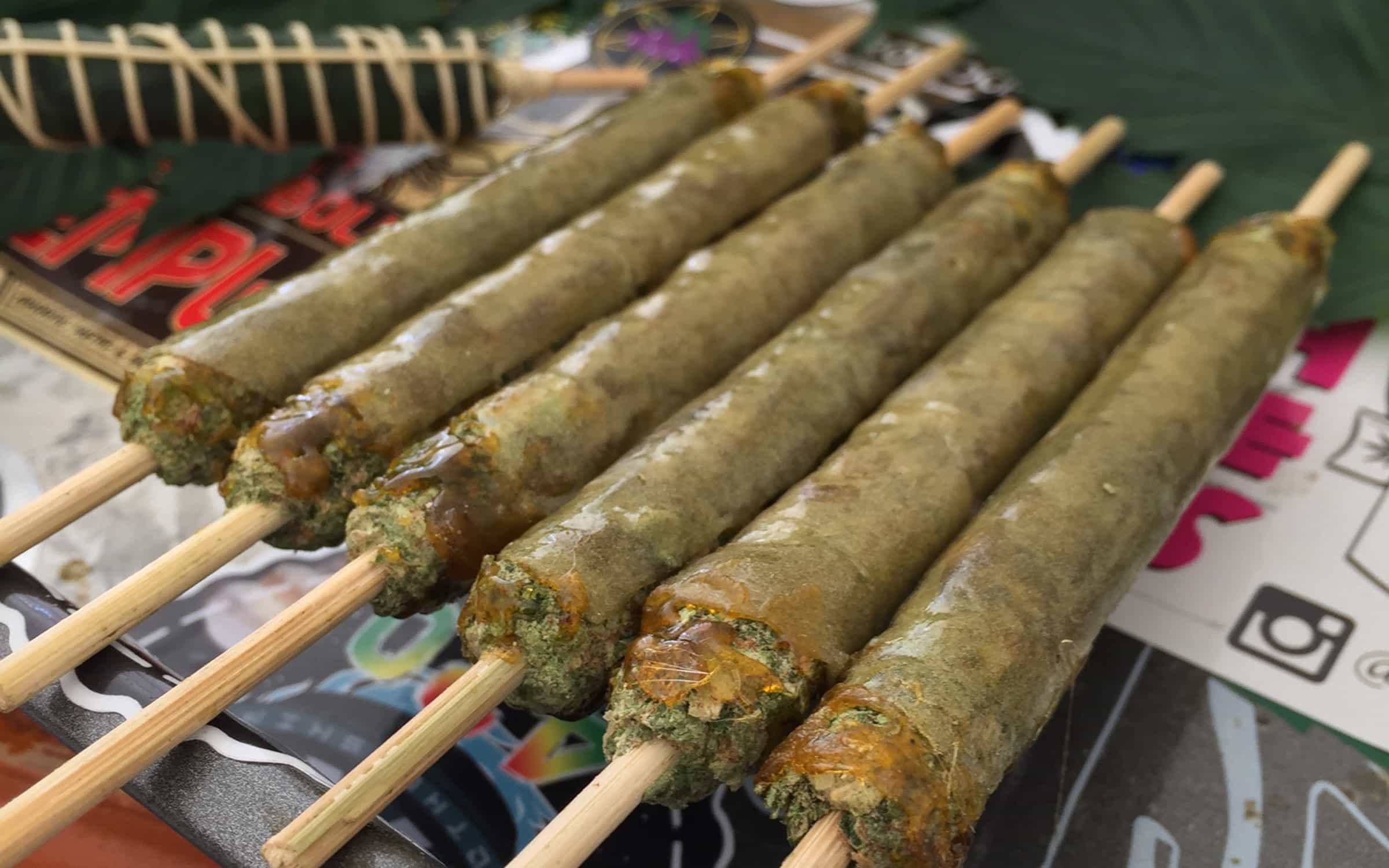 Thai sticks (aka Buddha sticks) is the term used to refer to a unique blunt-making technique that involves skewering buds on a stick and dipping them in cannabis concentrate.

The Thai stick has grown in popularity because it burns incredibly smoothly and for a very long time.

In fact, a Thai stick can burn for hours, and they’re much more potent than your average blunt because the skewers are made using the entire nug, which is then dipped in hash oil and wrapped in a pot or banana leaf.

Once covered, they are then bound with hemp wick to be dried and cured before you can smoke them.

Some opt to “twax” their Thai sticks, which means it gets coated with a thin layer of concentrate such as wax or shatter to increase the potency.

Where Does it Come From?

As we mentioned before, Thai sticks originated in Thailand.

It’s uncertain when they were first made, but some experts believe it’s within the last few centuries.

What we do know for sure is that we can thank Thailand for inventing the bong hundreds of years ago, which is also proof of Thailand’s long-standing love affair with tobacco.

Fast-forward to the 1970s when the Vietnam War was in full swing, and that’s where you would first find American soldiers toking up on a good old Thai Stick before smuggling them back into the United States and introducing them to the rest of North America.

In these cases, they would sometimes dip the Thai stick in opium as well. Talk about trippy.

The Thai stick supply chain ultimately fizzled out during the 1980s until pretty recently.

The superstardom of the Thai stick in the 1960s eventually gave way to a steady decline in interest over the years due to increasing regulations and prejudice towards indulging in your favourite sticky icky.

Fun Fact: Even though it is widely believed the word ganja is Jamaican, it’s technically a Nepali and Hindy term used to refer to marijuana flowers, commonly used in Thailand, India, and other Southeast Asian countries.

How To Make One

While time-consuming, the final results and experience of smoking a well-crafted Thai stick are pretty awesome. If you’re wanting to try your hand at making a Thai stick at home, you’ll need: 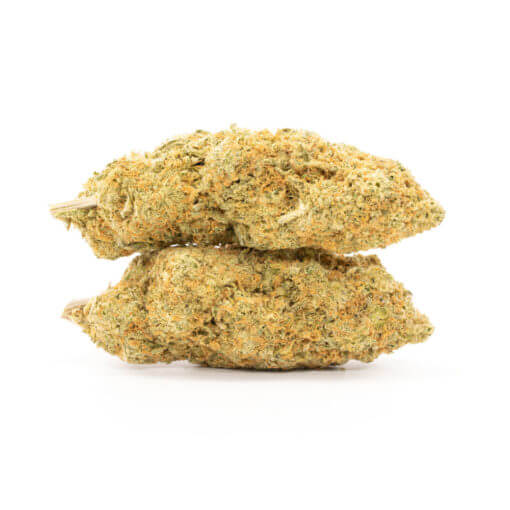 Technically you don’t have to use a banana or cannabis leaf to wrap it with, but these are the most commonly used ones.

In terms of bud or flower — you can use any Sativa, Indica, or hybrid strain you have on hand, though traditionally Thai Sticks are made with, well, Thai Stick buds.

First, take your skewer and dip it in hash oil or some sugar water, then, take your full bud cannabis and skewer them through; then wrap it in your leaf of choice. Next, wrap it all together with your hemp wick, then leave it out to dry and cure for several hours before smoking.

There are a few variations on the same theme here – many choose to dip the bud in hash oil once it’s skewered, while some prefer to dip the entire leafy package in oil for maximum potency. Hash oil might be difficult to find here, but shatter, kief, and distillate are often used instead to give it that elevated kick.

It’s an in-depth process, but we promise it’s worth it.

As we briefly touched on earlier, there is a Thai stick strain as well.

It’s a pure Sativa straight out of Thailand that made its way to the United States in the 1970s. Its moderate THC content is excellent for boosting creativity, and its aroma is fruity with spicy undertones — similar to sugar and potpourri.

Emphasis on the pot-pourri. Get it?

The dark green buds create a burst of spicy fragrance when you burn it and provide a reasonably uplifting high, followed by utter relaxation. Tokers also appreciate this strain for its therapeutic properties, especially for mood and mental disorders like ADHD, bipolar, stress depression, mild anxiety, and insomnia.

That said, this strain may not be the best choice for those with moderate or severe anxiety because smoking any marijuana strain increases heart rate and can cause paranoid thoughts in some users.

This legendary strain has birthed some of the world’s most beloved strains, including Juicy Fruit, Voodoo, and Haze. Its mild effects make it ideal for those wanting a pick-me-up to help them power through a long day.

It is a relaxing strain, so keep this in mind if you’re planning on toking up during the day, and you have to be on-the-go physically.

Those in search of a high potency THC product should look no further than a classic Thai stick. It doesn’t get much more intense than a Thai stick cigar coated in weed concentrate.

In other words, you’ll get very, very high.

Nevertheless, assembling and smoking this cannabis blunt takes time, so be sure you have plenty of time to enjoy it because it’s well worth the effort.

Regardless of how fun they are to smoke, you can’t make a Thai stick every day because of how ridiculously potent they are as well as the massive amount of carcinogens you inhale when smoking one.

Instead, you should view smoking a Thai stick as something best saved for a special occasion or celebration.

And one more last piece of advice before we sign-off: if you plan on making a Thai stick yourself, we recommend making several at one time, so you do not repeatedly need to wait hours or days for one to cure.

Or, if you’re not feeling the DIY scene of making your own, your local dispensary may be able to hook you up with one.

While making a Thai stick isn’t one of the easiest or most efficient ways to get high, it will undoubtedly be one of the highlights of your smoking career that is well worth the blood, sweat, and tears.