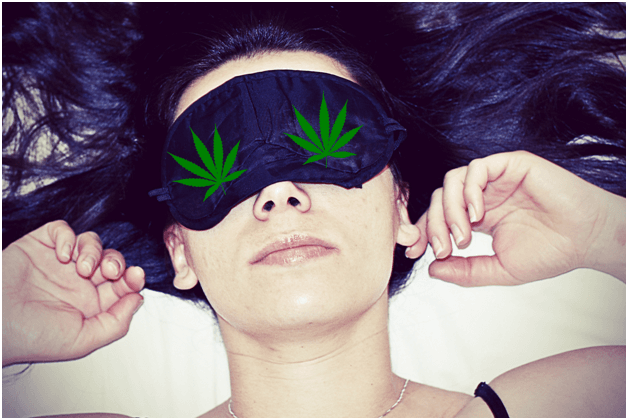 Using marijuana before bed time is particularly popular among cannabis enthusiasts. Why is that so? Why do people enjoy their green nightcap so much? Let’s shed light on some marijuana research to explain why the weed and sleep seem to go hand in hand.

Although insomnia is the most common illness treated with cannabis, the plant seems to have a myriad of effects on sleep. Cannabinoids – chemical compounds found in the cannabis plant – mimic the activity of endocannabinoids found naturally in the brain.

These marijuana cannabinoids, along with their biological pathways, constitute the body’s endocannabinoid system, which is responsible for regulating sleep and ensuring longer and more efficient rest.

Besides, research has found that cannabis influences sleep directly. In order to understand this process and explain why smoking weed before bed is a good idea, we have to take a closer look at the difference between CBD and THC, and the effects of both indica and sativa strains on the brain.

CBD and THC: How Do They Affect Your Sleep?

You’re probably aware that there are different types of cannabis strains. Some of them will get you high (they’re rich in THC and they have low CBD levels), some just help you relax (High-CBD, low-THC). Most studies have examined high-THC strains so far, as CBD strains are more difficult to find in some areas of Canada.

So how do those high-CBD strains affect our sleep? According to a 2006 study conducted in both lights-on and lights-off environments, cannabidiol increases alertness with the lights on and has no distinguishable effects on lights-off sleep. In conclusion, the study have found that CBD holds therapeutic promise for people suffering from somnolence, or for those who struggle with excessive daytime drowsiness due to a poor night’s rest.

While sativas are known to give users more cerebral and uplifting high, there’s a popular opinion that indica strains induce heavier and sleepy effects. If you browse the most popular strains for sleep, you’ll notice a nice feed of indica purple patched with some hybrid green.

Although there are no DNA testing results that could show exactly why indicas typically provide better rest, some people believe that the terpene content is of significant importance in this aspect. Simply put, indicas may have more relaxing and sedating terpenes than sativa strains. Next time you experiment with weed and sleep cycles, you’ll now which to choose!

Now, this sounds interesting. When THC degrades over time, it becomes a soothing chemical – cannabinol (CBN). This constituent of the cannabis plant is five times more sedating than Tetrahydrocannabinol.

When compared to chamomile tea, using cannabis in moderate amounts is more effective. According to a study in 1973, THC decreased the average time it took participants to fall asleep by an hour.

THC or CBD used before bed can lead to an increase in overall sleep. Additionally, one study found that the more THC in the body, the more time a person will spend sleeping.

On the other hand, higher doses of THC tend to cause some sort of a “hangover”. In short, when you wake up, you may feel dizzy and distracted. But the feeling is far less daunting than when you drink too much alcohol.

See this post to know more about what happens when you smoke too much weed.

If you experience a sleep condition characterized by frequent obstructions of breath that can last up to several minutes, you probably struggle with sleep apnea. The least comfortable thing about this condition is that it causes the individual to wake up several times over the course of the night. As a result, they may experience effects such as headaches, fatigue, inattention, daytime sleepiness, and other health problems.

As preclinical studies find, cannabis improves this condition. A study in 2013 that measured the effects of dronabinol (a THC “mimic”) recorded improvements in 15 out of 17 study subjects after 21 days of treatment. Another 2012 study examined the THC’s potential to restore respiratory stability by regulating the signaling of serotonin.

According to my personal experience, cannabis relieves the problem of snoring. When I was using alcohol, each heavier night got me snoring like a damn beast. On a daily basis, this problem was not so troublesome, but it still happened. On the contrary, I’ve never snored when I took my green nightcap. So now both me and my fiancee live a happier (and quieter!) life.

One of the ways marijuana affects the sleep cycle is by inducing a shorter REM sleep. Many people who enjoy smoking weed before bed report a lack of dreams, which happens only during REM sleep.

While there are still voices out there claiming that less REM sleep should be referred to as a side-effect of using marijuana, scientists are still unsure what actually is the purpose of REM sleep.

Interestingly, people who gave up on using marijuana frequently reported increased REM sleep. This is also known as the “REM rebound” effect. It is accompanied by an increase in dreaming over the course of the night. However, this effect usually wears off within days or weeks, depending on how often the individual smoked weed before.

Another way smoking weed before bed has an impact on the sleep cycle is the amount of slow-wave sleep, also known as deep sleep. Studies indicate that THC increases the amount of this kind of sleep during the slumber.

Because deep sleep is believed to rule the roost in the regeneration process that occurs during sleeping, we may freely associate this sign as a positive one.

Furthermore, experts tend to share the opinion that the most harmful effects of sleeping disorders derive from a lack of slow-wave sleep. For instance, there was a study that showed the relation between reduced slow-wave sleep and high blood pressure in older men.

As you can see, cannabis is also very versatile when it comes to regeneration during the night. Have you ever encountered any sleeping disorders in your life? If so, did smoking weed before bed help you? Share your stories in the comments!

More: See this post to know about good vs bad weed.

What is HHC? How Does it Work and What are the Benefits