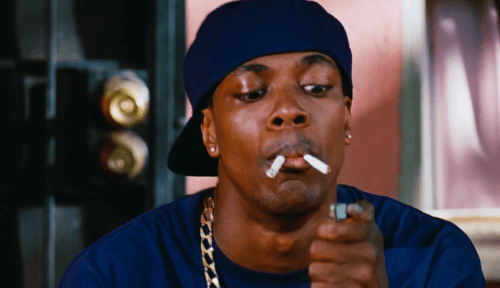 Sometimes it can just be fun to chill out with some nice weed, light up and watch a film with some good munchie food. The following are 5 fictional characters from the movies who also happen to enjoy getting high. These stoner movie characters are from different genres including classic stoner favorites, comedies and even horror, but they all share a love for beautiful green buds.

“Dude, am I really high, or is this actually working?”- Harold

The duo, after smoking a great deal of marijuana and watching an advertisement, get a craving for the fast food chain, White Castle. So they decide to go on a quest to visit the restaurant. They encounter many interesting situations along the way, including meeting Neil Patrick Harris playing a sex crazed party animal version of himself, and getting a cheetah high before successfully riding it.

What was the best stoner line from the film? Check it out:

[In surgery] “Hang on a second, nurse. What we should probably use is marijuana. That’ll sufficiently sedate the patient for surgery.” – Kumar

“We don’t have time for questions. We need marijuana now, as much of it as possible! Like a big bag of it.” – Kumar

#4 – Marty Mikalski, The Fool, from a stoner movie named, “The Cabin in the Woods”

“Cabin in The Woods” is a 2012 horror film from director, Drew Goddard and producer, Joss Whedon. The horror comedy pays tribute to past horror films and introduces a interesting twist. Not only that, a great stoner movie hero named Marty makes his debut.

In the film, Marty and four friends plan a weekend away at an isolated cabin. Somehow they don’t notice the many foreboding warnings that it might not be a great idea. “The Cabin in the Woods” is actually an elaborate trap designed and operated by the government to offer blood sacrifices to the old gods.

Marty is one of these unlucky chosen sacrifices. He’s introduced to the audience as he pulls up in a car smoking pot from a huge bong, which usefully converts into a travel mug. Marty is designated as “The Fool” by the government. However, in an interesting plot twist, Marty’s continual bake-on interferes with the other subliminal and chemical pushes allowing him to fight back. Marty is eventually able to discover the secret underground entrance and it’s thanks to him the audience is introduced to a fantastic collection of supernatural evil delight.

“Statistical fact. Cops will never pull over a man with a huge bong in his car. Why? They fear this man. They know he sees further than they… and he will bind them… with ancient logics.” – Marty

“15 bucks, little man,
Put that shit in my hand
If that money doesn’t show
Then you owe me, owe me, owe” – Jay

Director and writer Kevin Smith first introduced the world to Jay and Silent Bob back in 1994. The fill, called Clerks, took place where they sell weed outside the Quick stop. Throughout the day in the film the characters are seen dancing, loitering and generally harassing passersby. Jay and Silent Bob were embraced by potheads everywhere. It was one of the first times in film that the portrayal of pot dealers was as fun and entertaining rather then scary or dangerous. The characters went on to appear in many of Smith’s other films including Mall Rats, Chasing Amy, and Dogma.

In 2001, the characters were popular enough to get their own stoner movie buddy, “Jay and Silent Bob Strike Back”. When Jay and Silent Bob learn that a movie called “Bluntman and Chronic” is coming out featuring their comic book counterparts, they become excited about all the money they will make from from the royalties. After discovering they won’t get any money, they set off on a road trip to Hollywood in order to sabotage the film.

“Who smokes the blunts?

We smoke the blunts!” –Jay

The film Up in Smoke is directed by Lou Adler and stars Richard “Cheech” Marin and Tommy Chong. The duo were already an established comedy team before appearing in Up in Smoke, which features rewritten material from their standup performances. This stoner movie had several sequels including Cheech and Chong’s Next Movie, Nice Dreams, Things are Tough All Over, Still Smokin, and Far Out Man. In 2013, an animated film was made entitled Cheech & Chong’s Animated Movie.

Anthony “Man” Stoner, played by Chong, is an unemployed pothead and amateur drummer who ditches his strict parents and hits the road. He soon meets kindred spirit, Pedro De Pacas, played by Cheech. The pair have many misadventures including being arrested for possession of marijuana and performing in a rock band contest. Up in Smoke might just be the Citizen Kane of stoner movies and is famous for establishing the stoner comedy genre of film.

“I know you don’t smoke weed, I know this; but I’m gonna get you high today, ’cause it’s Friday; you ain’t got no job… and you ain’t got shit to do.” – Smokey

Finally, we have the top of our best stoner movie characters list. The film is Friday and the character is pot smoking guy Smokey. Friday is a 1995 stoner buddy comedy film from director, F. Gary Gray in his directorial debut. The film stars Ice Cube, who also co-wrote the film, as Craig Jones and Chris Tucker as Smokey in his first starring role. After Craig loses his job after being framed for stealing, he hangs out on his front porch and gets high with his best friend Smokey. The film’s success spawned two sequels – Next Friday (2000) and Friday After Next (2002). A fourth film entitled Last Friday has been in the works for several years.

Smokey is a carefree, mischievous, drug dealer who sells weed for Big Worm. the local neighborhood psychopathic supplier. Smokey understandably enjoys smoking weed a lot more then selling it. He has a confrontation with Big Worm who threatens to kill both him and Craig if they do not give him two hundred dollars by 10:00 pm that night.

The film ends with Smokey settling things with Big Worm and promising he is giving up drug dealing and going to rehab. The moment he hangs up the phone, he lights up a joint and ends the film by stating “I was just bullshittin! And you know this man!” And that is why Smokey is the number one top stoner character from film.

“Weed is from the earth.

God put this here for me and you.

Writers who wrote when stoned