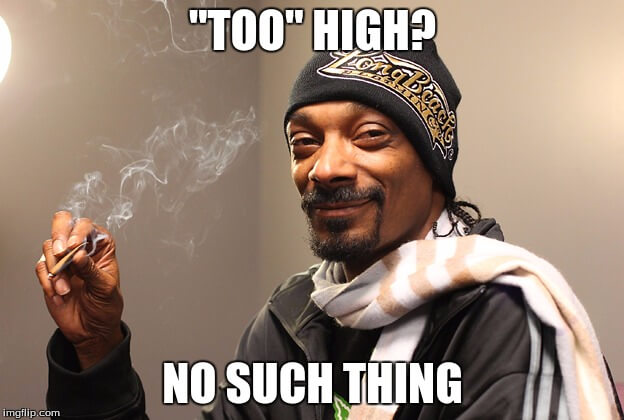 Artists of all kinds have either tried smoking marijuana or have worked with people that do. So, it’s not that surprising to find lists of top 50 or 100 celebrities that have smoked weed.

Here’s a slightly different stoner list of famous talk show hosts that smoked weed on a regular basis or at least tried to smoke in the past. I can’t imagine being on TV hosting a talk show that’s watched by millions of people and being high, although it would be hilarious (probably for everyone except for the one who’s high). But this is a list of famous people that have done it and lived to make millions.

Although Jon Stewart is not a habitual stoner, but he has tried weed in the past. Now he’s an ally and has always had positive coverage of marijuana issues on his show. Who can forget the iconic scene from the movie, “Half Baked,” where Guillermo Diaz visits his apartment to drop off some weed. To refresh your memory here’s the video. 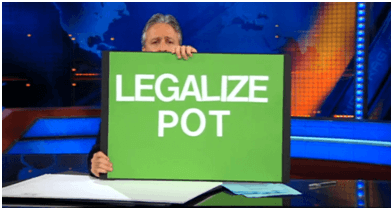 Jon Stewart also famously once said, “Do you know how many movies I wrote when I was high?”. 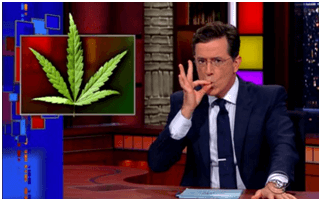 Like Jon Stewart, the successful late night TV host doesn’t smoke on a regular basis, but he has smoked weed in the past and probably more than once. He recently spoke about it on his show when speaking of his friend Bill:

“Back in high school, Bill was the first person I ever did something with that is now legal in Colorado,” said Colbert.

Colbert then describes how the two showed up to their homecoming dance without a date, only to leave early for a smoke session provided by Clark. The problem, however, was a lack of rolling papers.

“This substance, sometimes you wrap up like presents, and then instantly destroy with fire,” Colbert further explained. “So we used the comics page from the Sunday paper, which I think might be why I’m a comedian now.” 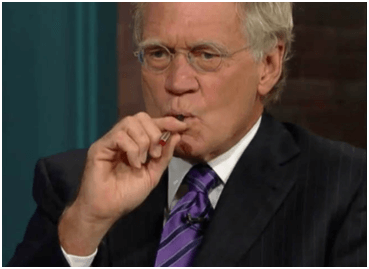 David Letterman was an avid stoner at one time, but then stopped smoking because he felt it made him dumb. That’s his opinion, I feel it made me smart. Anyway, back to David Letterman, he would smoke and stare at the fridge for hours. I don’t know if that’s a real story or something he picked up from what other people say they did after smoking weed. But he did bring this up when discussing marijuana with Oprah Winfrey. 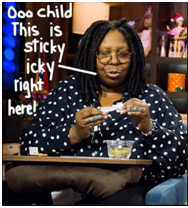 The Oscar winner and the co-host of the View recently penned a love letter to her vape pen. Here’s a snippet from that – “My vape pen and I maintain a mostly private relationship. Sure, I’ll sometimes show my pen to a friend or share her with a close confidant. But mostly it’s just she and I working through my pain. And her ability to help me live comfortably with glaucoma makes her one of the more important figures in my day to day. When I show her to a friend, the reaction 99 percent of the time is: ‘Holy shit, where did you get this and how can I get me one?’ They’re seriously that blown away by my vape pen. And they should be. She’s that amazing.” 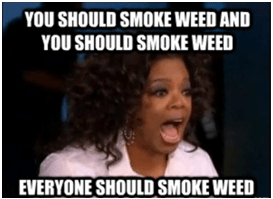 The famous TV host admitted to David Letterman in the interview referenced above, that she hasn’t smoked weed in 30 years. I wonder though if she ever feels the urge. I mean, if I had Oprah’s money, I would be doing nothing but smoking weed! 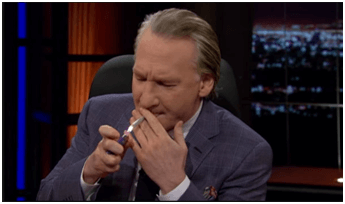 We all know that he smokes weed, after all he’s done it live on HBO. However, he’s not as active of a stoner as he’d want you to believe. He only uses it get his creative juices flowing. 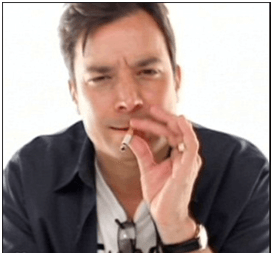 The host of the Tonight Show can do a killer stoner impression and when asked whether he partakes in puff, puff pass, he had this to say – “I’ve tried it, but I’m not a pot guy,” he says. “I just can’t get into it.” Maybe he’s saying that because of his new job, who knows, but we have the man on record saying he tried it! 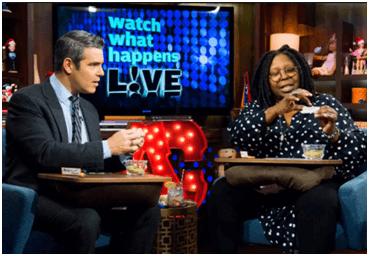 The host of Watch What Happens Live isn’t shy about his having smoked weed. Nearly every episode has some reference to it. He’s even gotten high from randos while walking his dog in New York. Andy is so enamored with smoking weed, that he has the attention of some of the A-list stoners like Willie Nelson, Snoop Dogg, Susan Sarandon and Sarah Silverman. 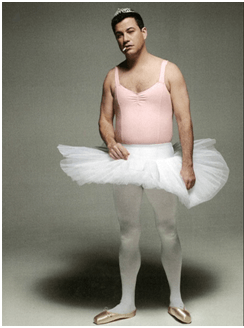 In 2013, Jonah Weiner wrote an article about Jimmy Kimmel and how he hung out with him and talked about and smoked weed in his beach house. At first Jimmy didn’t want Jonah to write about that. His wife now and then fiance Molly was pretty clear about it. “We know people with dispensary cards,” McNearney, 34, says, referring to California’s medical-marijuana storefronts. “Jimmy doesn’t want to be seen coming out of one of those.” But as the night went on, Jimmy loosened up a bit and decided to go with it! It’s a very interesting article, click here to read the full thing. 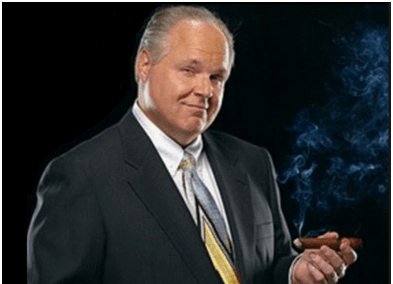 Didn’t expect this one here, did you? It’s like a M Night Shyamalan twist. But the most hated radio talk show host (at least for the liberals in US and around the world) had some nice things to say about his experiences when he smoked weed. He even knew his audience wouldn’t appreciate this:

“All you listeners out there in flyover country, I know this might scare you a bit, but I wouldn’t have been able to make it through hundreds of shows if it weren’t for the benefits of medical marijuana. When I topped off my cigar with a half gram, all my tremors and cravings for painkillers disappeared. I was able to speak more eloquently than ever, if anything. And when I stopped craving the painkillers, I went back to normal cigars without any withdrawals whatsoever. I know this may come to a shock to some of the people out in the heartland, but Marijuana is a truly miraculous medicine.”

That’s it folks, a list is always good to end when you have 10 of the best people covered.