Chemdawg has slowly but surely been creating a name for itself across the market and cannabis culture over the years.

Whether it’s its origin story that’s steeped with mystery, its uncertain genetics or the various popular hybrid strains it “helped” produce – wink, wink – Chemdawg has practically earned itself a permanent residency in the cannabis hall of fame, and rightfully so!

While we could discuss at length the various hybrids that playboy strain Chemdawg has born, including Sour Diesel and OG Kush, we are not here to talk about how it’s sewn its wild oats. Instead, today, we are talking about Chemdawg itself.

If you’re new to the world of weed, a word to the wise, Chemdawg can be an incredibly potent strain in its own right. This cannabis strain can have THC levels ranging between 15 and 20% based on its particular growing conditions.

However, if enjoyed responsibly, users can indulge in an extensively cerebral experience paired with a seductively strong body high.

So, you might be thinking, “If Chemdawg has earned such a stellar reputation, what makes it so special?”

That, dear friend, is what we will be covering today! 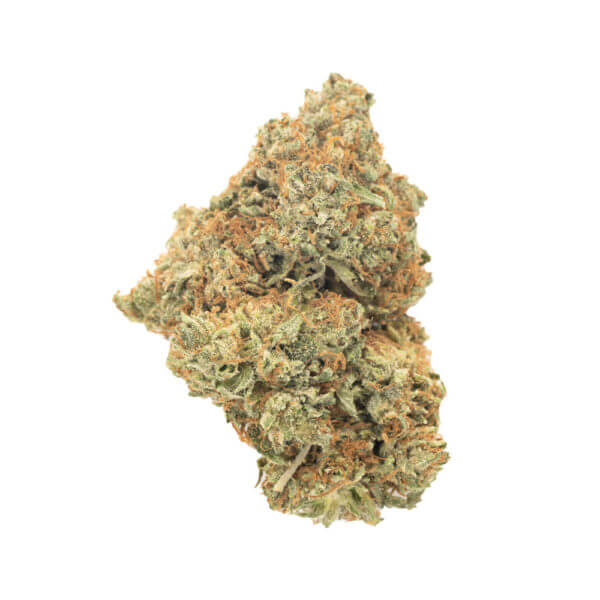 Chemdawg, also sometimes referred to as Chemdog, is a legendary cannabis strain with a genetic history shrouded in secrecy, which arguably only adds to its appeal!

While some believe that it is a hybrid strain produced by US breeders who crossed Thai and Nepalese sativa landrace strains, these claims have never been confirmed. Another popular theory speculates that Chemdawg’s origins resulted from a complex seed exchange between growers at a Grateful Dead concert.

Yet another story pins the parentage on a Colorado strain known as Dog Bud, which got its name from its effects, making blazers roll over like a dog.

Sometimes, in cases like these, the magic is in the mystery! Regardless of where Chemdawg is actually from, it has become a widely loved and celebrated strain for its distinct flavours and uplifting, energetic high.

The strain itself is a nearly balanced sativa/indica hybrid with a ratio of 45%/55%, respectively. It is known amongst the toker community as being especially potent, with THC levels ranging from 15 to 20%.

It has also gained a reputation among cultivators for being notoriously hard to grow, making it a strain that’s best left to those who really know what they’re doing.

So, if you’re a novice toker or someone looking to try their hand at growing your own weed, the optimal approach would be to work your way up to Chemdawg once you’ve got a lot more experience under your belt.

That said, when grown successfully, the efforts are well worth it!

Right from the get-go, Chemdawg will draw you in with its unique appearance. This strain has medium-sized buds that don’t necessarily look like those of a hybrid with pure indica-dominant lineage.

The leaves are a pleasant spring green colour. The buds are long and tapered rather than the more popcorn-like look of a pure indica. The flowers of Chemdawg are relatively loose and have wispy, feathery leaves, with red and orange pistils threaded through.

Finally, to cap it all off, the leaves are covered in a layer of sticky white trichomes that gives the buds an almost silver-white appearance. 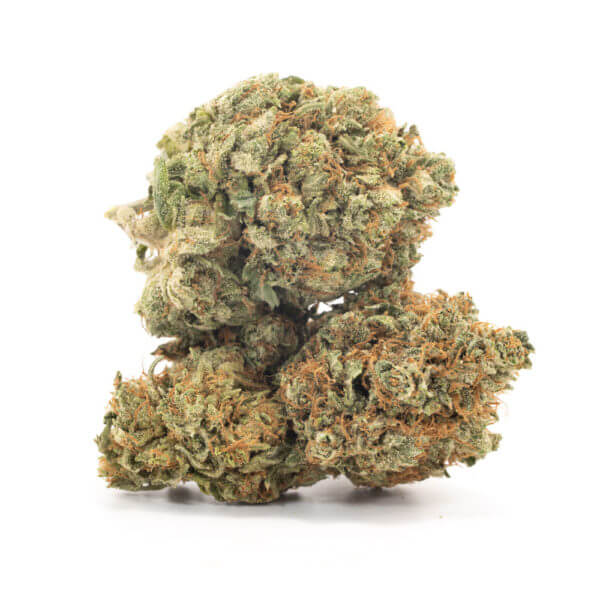 Because of its loose structure and sticky texture, Chemdawg buds are especially tough to break apart by hand. In this way, if you plan on using this bud for joints or pipes, if you haven’t already, it may be time to invest in a solid and reliable weed grinder.

When it comes to its fragrance, Chemdawg is arguably one of the most aromatic strains available on the market today! It tends to fill and occupy the room with its pungent diesel aroma, which many say is the source of its name.

So, if you’re looking for a discreet-smelling cannabis strain that allows you to hide your high, you should be extra careful with this one. Chemdawg refuses to be ignored!

On top of its characteristic diesel smell, the pungent flowers also give off scents of musky earthiness and pine.

Just as it refuses to be ignored, when it comes to Chemdawg, what you smell is what you get in terms of flavour. In other words, this indica-dominant hybrid tastes like it smells.

Its pungent diesel flavour sticks to your tongue and will have you thinking about it long after the sesh is over.

Unsurprisingly, Chemdawg has a strong sour diesel flavour that reminds some users of chemicals on the exhale, with an almost ammonia-like tang that lingers.

Still, it also has a piney and lemony aftertaste, making it a smooth and pleasurable smoke.

How Long Does the Chemdawg High Last?

If you’re expecting a slow but surely release, think again. The high from Chemdawg hits quickly, sometimes sooner than some users would expect.

Tokers may experience a sharpening of their senses and increased awareness of their particular surroundings.

While these initial sensations may be slightly disorienting at first, the head high becomes progressively more cerebral, uplifted, happy and introspective when taken in the right environment.

The ability of Chemdawg to enhance sensory experiences makes it particularly excellent for stimulating conversation and indulging your creative side. 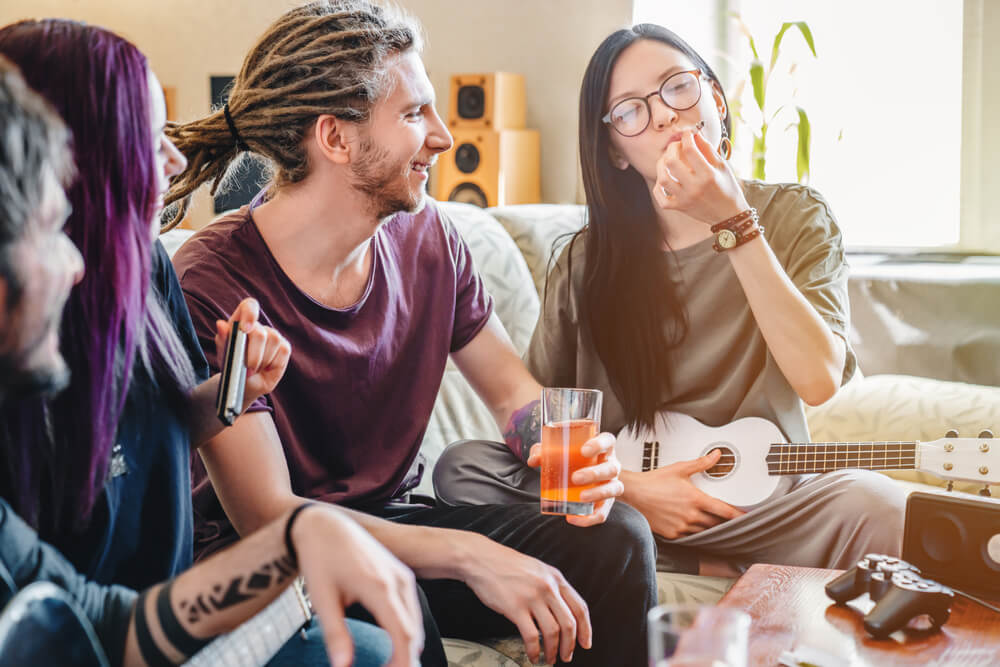 A few puffs of this potent cannabis strain are also enough to induce an uncontrollable case of the giggles excellent for enjoying some bud with your buds!

The effects of this strain can last for hours, making it best suited for the afternoon, evening or nighttime use when you have the time to appreciate its effects fully.

Chemdawg also lends itself to a powerful sense of physical relaxation on account of its slight indica-dominant genetics. However, it’s not enough to produce heavy-handed couch-lock unless taken in higher doses.

That said, as we outlined previously, Chemdawg has a reputation for being a seriously potent marijuana strain. With THC levels between 15 and 20%, amateur tokers should approach it with caution. Even users with a high THC tolerance should moderate their intake accordingly.

Common side effects of Chemdawg are relatively similar to other strains, including cottonmouth, dry eyes and paranoia when taken in higher doses due to its high THC content.

If you were to ask tokers what some of the most epic and well-known strains are, it wouldn’t be surprising to find Chemdawg on their list.

With its powerful yet relaxing body high and intense and engaging cerebral effects, this marijuana strain has become a fan-favourite amongst blazers looking to indulge their creative sides, relax and unwind and enjoy toking up with friends.

However, as we’ve said multiple times now, this is undoubtedly a strain to approach carefully. Along with having an incredibly positive reputation, Chemdawg is known throughout the cannabis community for its extremely potent effects.

So, if you’re new to the strain, adhere to the tried and true homage of start low and go slow to avoid a green out.

Chemdawg’s origins may remain a mystery, but, after this article, the reasons behind what makes it special and why we love it are not!

So, what are you waiting for? Get your hands on some Chemdawg today by visiting the Cannabismo website!