As if you needed another reason to visit the sunny, tropical paradise of Thailand, the country is now advocating that cannabis be the next cash crop for the country’s farmers as an additional income source.

Of course, nobody is going to Thailand right now – #Covid.

However, the country is heavily reliant on the money brought in from tourism annually. So it shouldn’t come as much of a surprise that the government is actively seeking out other ways to generate revenue.

According to an article published by Reuters, this announcement comes after Thailand removed particular cannabis and hemp products from its narcotics list last year.

What are the new rules surrounding farmers growing weed, and why is the government promoting it as a cash crop?

Let’s find out together!

Before you think it’s a recreational weed free-for-all, you might want to slow your roll. This decision only involves growing medical marijuana.

Marijuana is closely tied to the culture of Thailand. It was utilized for medical and recreational purposes, such as cooking, for generations, growing freely in the region as a landrace strain.

However, recreationally, weed remains illegal. Due to international pressures, the Thai government made the use and possession of cannabis illegal in 1935.

That said, as those who have previously been to Thailand will likely tell you, it is not difficult to acquire a joint in a backpacker hostel or hear the rumours surrounding bars in the islands that are famous for selling magic mushroom shakes.

Another popular item commonly found in Thailand is the aptly named Thai Stick. Thai sticks are a term used to refer to a unique blunt-making technique that involves playing cannabis buds on a skewer and dipping them in cannabis concentrate.

They are quite popular due to their incredibly smooth burn and the fact that they’re long-lasting.

So, in this way, recreational substance use may seem casual and widespread, coupled with a corrupt police system and sporadic enforcement, it may make it seem like it’s worth the risk.

However, while the access is easy, the consequences, if you’re caught, are not.

Arrests for marijuana possession are widespread in Thailand, with foreigners being arrested most commonly in known tourist areas.

While being caught with smaller amounts of weed will be treated more leniently, it can still land you up to 1 year in prison and/or no more than a 10,000 Baht ($420 CAD) fine.

But it doesn’t stop there. There are also severe immigration consequences for those caught. On top of likely being deported, there is also a strong chance of being ‘blacklisted’ from ever returning to the country.

Not only that but with such an unregulated recreational cannabis industry, there is no way to know for certain what it is you’re smoking or eating.

So, it’s best to err on the side of caution and stay on the safe side.

Marijuana as a Cash Crop 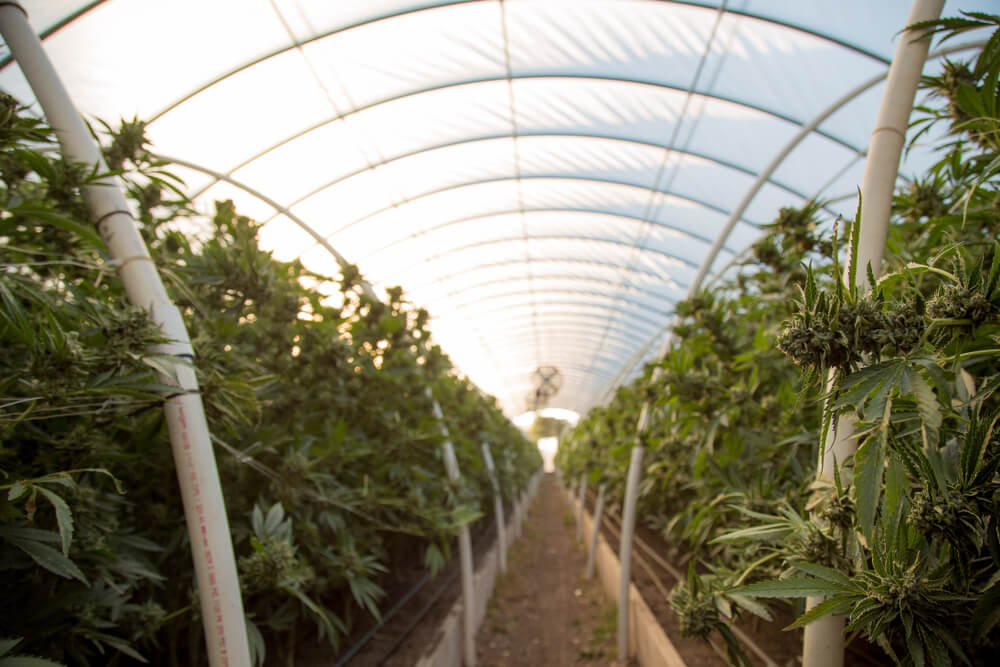 Thailand’s parliament voted to re-legalize hemp and CBD in 2018. Later, in 2019, lawmakers passed amendments to its Narcotics Act, allowing for the legalization of cannabis for medical and scientific use.

The 3,040-square meter greenhouse contains appropriate temperature, moisture and light controls, and the seeds for the 12,000 plants were provided by the government’s Department of Medical Service, the report explains.

The 2019 decision made Thailand the first Southeast Asian country to legalize weed for medicinal purposes. The government took it a step further in 2020 by amending the Narcotics Act to remove cannabis as a narcotic and allow patients, medical professionals and traditional healers to grow cannabis for medical and commercial purposes.

However, this recent ruling came with a lot of red tape and rules.

“Everybody has the right to grow marijuana by partnering up with provincial hospitals for medical use,” deputy government spokeswoman Traisulee Traisoranakul said in the Reuters article, going on to say that those interested would also need approval from authorities.

“So far, 2,500 households and 251 provincial hospitals have grown 15,000 cannabis plants,” she explained. “We hope that cannabis and hemp will be a primary cash crop for farmers.”

According to deputy government spokeswoman Traisoranakul, cannabis is also permitted to be used in food and beverages at restaurants so long as it comes from an approved producer.

The state drugmaker, the Government Pharmaceutical Organization, said that it would purchase weed from approved community manufacturers for up to 45,000 Baht ($1,892 CAD) per kilogram for those containing 12% CBD, the Reuters article states.

With the continued realization of the potentials of medicinal marijuana, one can only hope that the stigma surrounding recreational usage will also ween with time.

However, one of the most significant issues, which we briefly touched on previously, is the matter of safety regulation and quality assurance.

Recreational substances, including marijuana and other harder drugs, are easily accessible across the country for locals and tourists alike.

However, while finding them is easy enough, ensuring that they are safe to consume and appropriately grown/made is another story entirely.

Establishing a well-guarded and regulated cannabis industry would only serve to benefit Thailand internally and from visitors abroad by arguably creating a new name for itself as a cannabis tourist destination.

With these new regulations surrounding medical marijuana, it bodes well for increased regulation in the future that will hopefully one day extend to blazers of all walks of life.