Can Smelling Weed Get You High? Contact High Truths and Myths 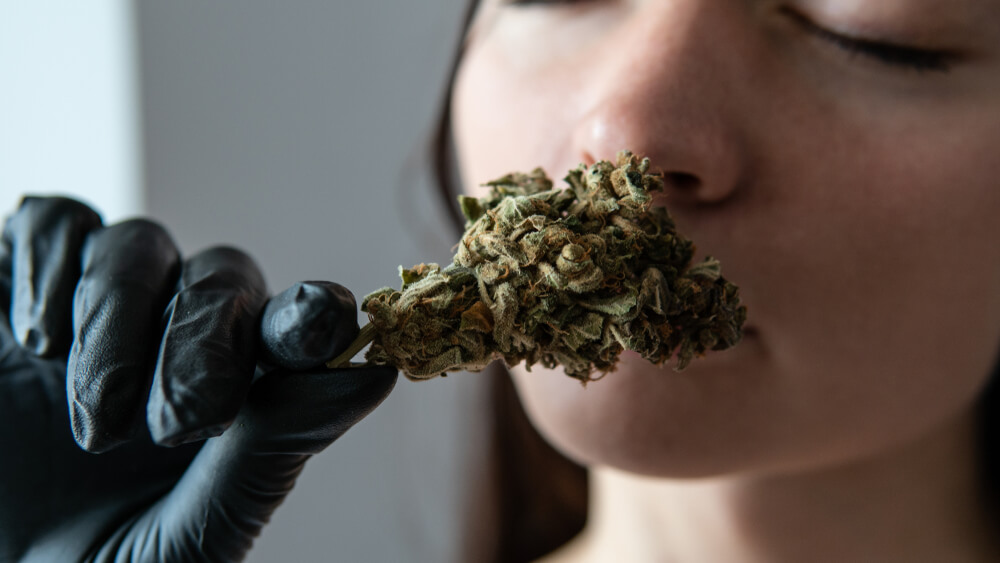 With weed becoming more and more popular around the world, the chances of smelling a whiff of some Mary Jane are undoubtedly going to increase, too.

It’s almost impossible not to recognize the strong smell of the countless different strains of weed that now exist. Even those who don’t smoke weed will be around some bud or even cannabis tokers at some point or another.

If you are someone that doesn’t smoke weed, you may be wondering if the smell of weed will get you high.

Maybe you’re concerned that if you smell it, your urine samples may test positive on a random drug test at your place of employment, and you want to know if you should try to avoid exposure. Maybe you’re just worried about being exposed to THC in general and nervous about catching a contact high.

We’re going to look at what exactly the risks are of unintended inhalation of cannabis smoke, and what exposure means for the average person.

Can Smelling Weed Get You High? 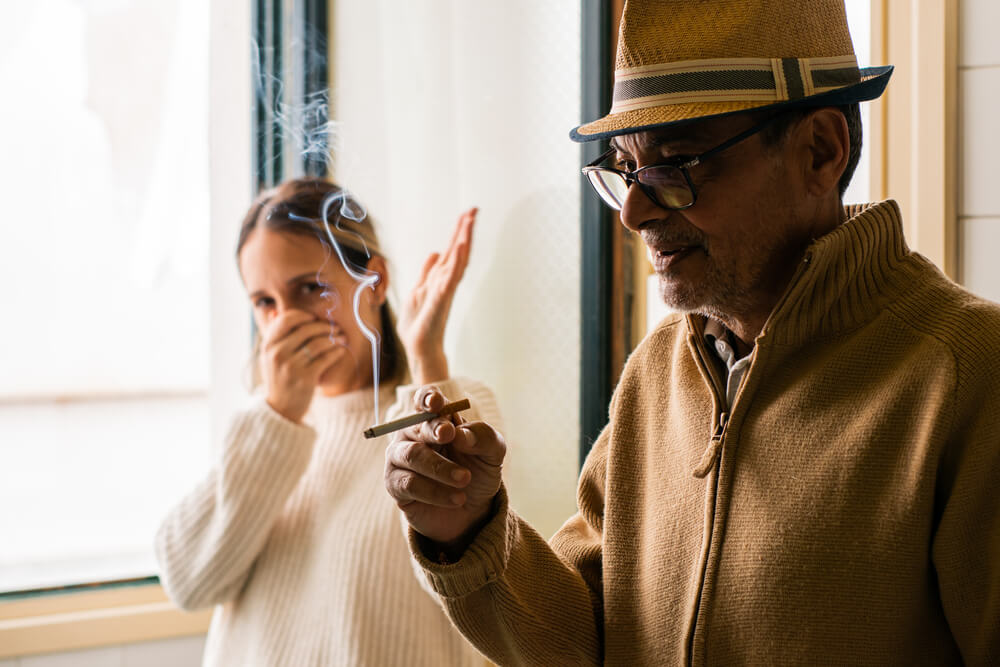 Strictly speaking, catching a whiff of cannabis, even really strong smelling weed, won’t get you high.

Not only is the cannabis still essentially “raw” if you haven’t smoked it yet, but even if you were to inhale some of the THC from some fresh flower, it wouldn’t be decarboxylated, so it wouldn’t have any psychoactive effects.

For weed to get us high, weed has to undergo a process known as decarboxylation first. In its quote-on-quote ‘raw’ form, there’s no THC, the psychoactive compound that gets us high, in buds at all.

Secondhand cannabis smoke, however, can create the possibility of passive exposure.

If you are around people smoking marijuana, secondhand smoke exposure can and will create what’s known as a contact high, but it can even negatively impact your lung health, but you probably already knew that if you already smoke weed!

Does Smelling Weed Affect You At All?

The smell of some nice, fresh flower can impact you.

The effects, however, are due to the terpenes that are in the cannabis plant itself and are not a function of smoking.

Scientifically speaking, terpenes have been proven to provide many benefits.

For example, a terpene like linalool will make you feel calm; it’s also the main terpene in lavender. It’s also been found to improve learning, restore cognitive and emotional function, and aid in fighting against Alzheimer’s disease.

Limonene, the primary terpene experienced when smelling lemons and a major terpene component in sativas, gives you a bump in the focus department. It’s also been proven to enhance your mood, improve digestion, and decrease your anxiety.

What are the Side Effects of Secondhand Marijuana Smoke? 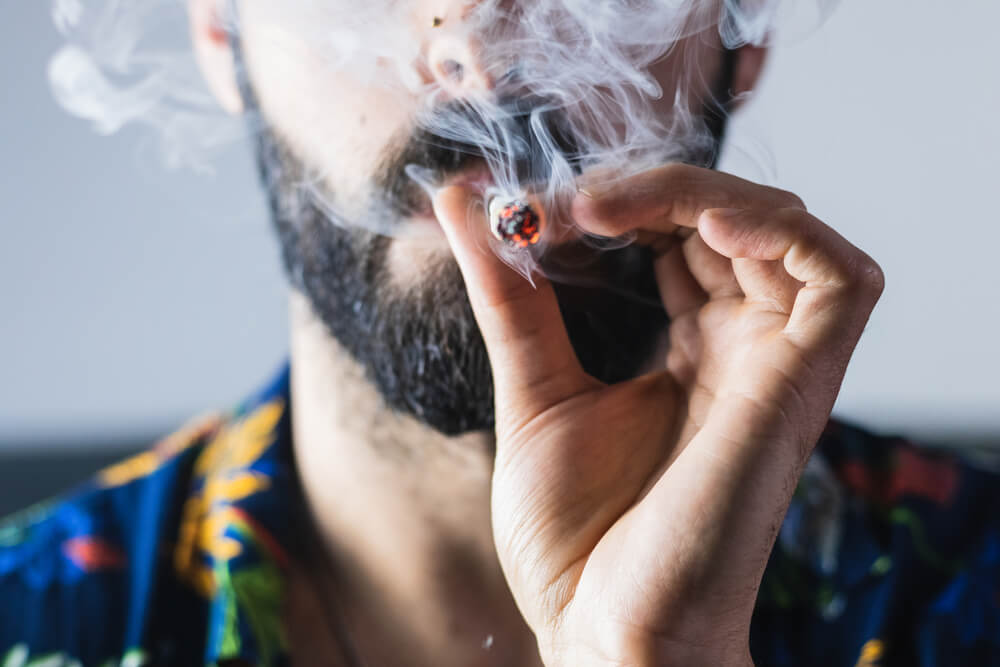 There are a few side effects of unintentionally inhaling marijuana smoke, some positive and some negative. Before diving into what they are, let’s explore what secondhand smoke is in the first place.

What is Secondhand Smoke?

Whether you’re talking about tobacco smoke or cannabis smoke, secondhand exposure is inhaling smoke created by someone else.

An example of this would be non-smokers in a poorly ventilated room with smokers. While they aren’t deliberately smoking, they are still inhaling either cigarette smoke or inhaling secondhand marijuana smoke.

Sometimes secondhand smoke is unavoidable and is a byproduct of being in an area with smokers and less-than-ideal ventilation.

In other cases, secondhand marijuana smoke is purposely created during marijuana use to create a secondhand high that augments the normal effects of the drug.

Believe it or not; some marijuana smokers find themselves deliberately smoking cannabis in a poorly ventilated area to boost the weed’s effects.

This can be a small bedroom, a totally unventilated room, or even in a vehicle with the windows rolled up. The main point is to expose the smokers to higher levels of THC in their blood, increasing the intensity of the high.

This is often called “hotboxing,” and it is a way of creating extreme conditions that combine contact highs with the direct effects of weed smoke.

This is an incredibly common way that marijuana cigarettes are enjoyed.

While a person who experiences secondhand smoke in poorly ventilated areas where marijuana is being consumed may experience an unwanted contact high from the THC, that isn’t the only possible negative effect.

The person smoking experiences a filtered version of the smoke, with much of the tar having been removed during the smoking process.

Non-smoker exposure can mean exposure to more dangerous smoke and even potential unintended negative impacts to lung health. The “harshness” of secondhand smoke can also contribute to airway irritation and can aggravate conditions like asthma.

One other possible unanticipated result of unintentional exposure is that someone with an undiagnosed or latent mental health condition may find that the exposure temporarily makes their conditions worse.

Even in countries and states where cannabis has been legalized, some occupations like transportation and public safety positions will still require a routine or random drug test.

If you are employed in an industry or line of work that performs urine screening, being exposed to secondhand marijuana smoke can elevate the THC in your blood above commonly utilized cutoff concentrations.

The THC may be present in the blood or urine, even if a contact high is never experienced, though this can potentially be avoided with only slightly better ventilation in the smoking area.

This means that even non-smokers who experience exposure to secondhand marijuana smoke have the potential to fail a urine test, even if they never partake in drugs.

Can Smelling Weed Get You High? What Does The Research Say? 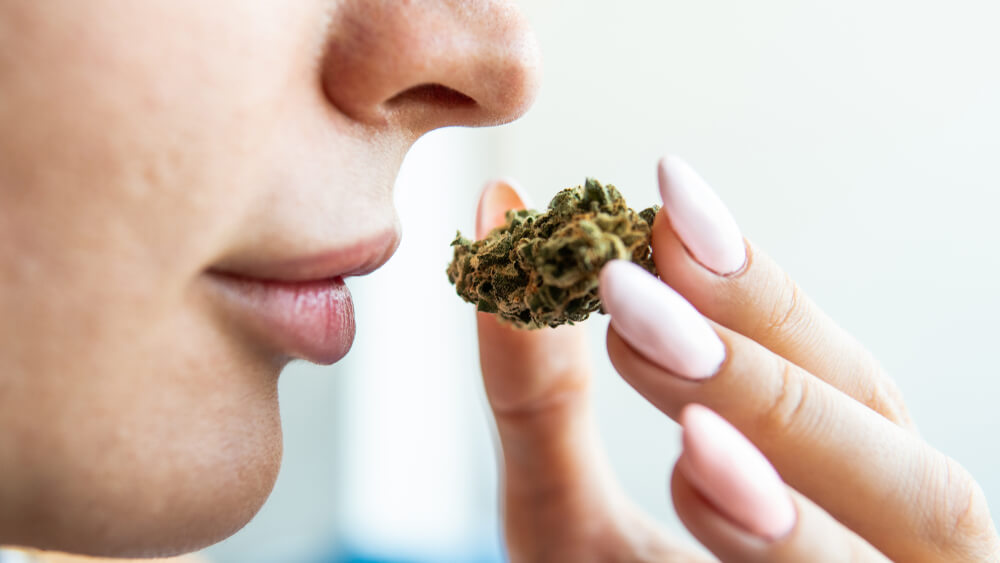 There have been peer-reviewed studies created from clinical trials where researchers measured the effects of THC on a person with exposure to secondhand marijuana smoke in a closed room, and while more research is certainly needed, there are some encouraging results.

They were able to provide confirmation results that being exposed to secondhand marijuana smoke can produce detectable levels of cannabinoids in the person’s blood and urine following an immediate drug test, the same way it would in a smoker.

While on one hand, the contact high was experienced and produced the expected changes in behaviour and cognition, these effects also resolved in three hours or less.

In one case, whether a contact high was felt or not, the person exposed to the marijuana smoke for only a short time during the first experiment did display measurable changes in vascular endothelial function, calming effects, and increased appetite.

While the research indicates that most side-effects of secondhand marijuana exposure are generally mild and easily overcome with a little time and fresh air, be sure that you’re being a courteous cannabis consumer and keep your clouds under control around those who don’t indulge.

Can Smelling Weed Get You High? Something to Keep in Mind

There you have it. While the chemistry behind it is still being studied in the quest for understanding, it is clear that simply smelling some fine ganja won’t suddenly get you high, however, you may experience some small change in mood as a result.

The main thing to remember is that the effects of secondhand exposure are quantifiable and can pose some risks to certain people.

But, provided you’re smoking responsibly and only hotboxing those who want to be there, you can reduce harm and increase enjoyment safely.