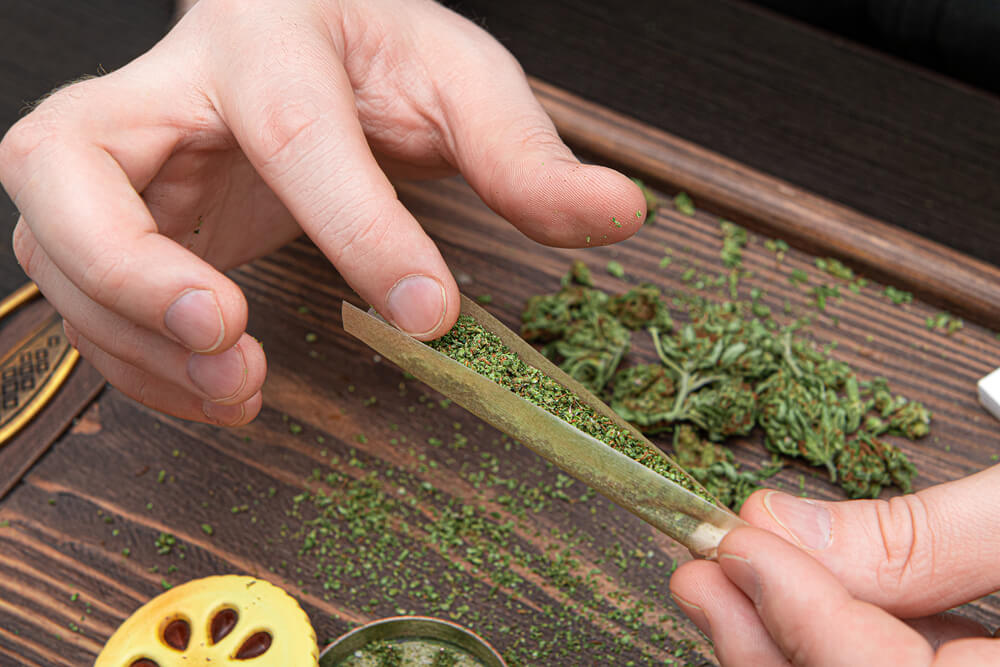 Whether you’re a casual toker or a seasoned veteran in the world of cannabis, there will likely come a time where you ask yourself, ‘is weed addictive?’

It’s an entirely fair question. However, the answer isn’t strictly black and white.

The effects of cannabis are certainly pleasurable and fun and can help with a wide range of medical ailments. However, there’s a difference between using weed for medicinal and recreational purposes and developing a full-blown dependency on it.

This distinction is what we will be discussing today.

This article will answer questions such as, is weed addictive, does smoking regularly lead marijuana users to become addicted, what causes weed addiction and what are the symptoms?

So, put on your thinking caps because there is a lot of valuable information coming your way!

Before we jump into whether weed is addictive or not, it’s important to clear up any misconceptions or misunderstandings about it so that we are all on the same page.

When we think of addiction, we tend to think that it’s a dependency where users rely on the drug to function. More specifically, addiction is commonly associated with physical dependence, which is common among users who abuse harder drugs, including heroin or even alcohol.

However, it isn’t the same thing.

You see, for things like heroin and late-stage alcoholism, the people affected by these drugs require regular use of them to even function in a normal state of mind. For example, heroin is commonly known to provide an intensely warm sense of euphoria and happiness.

This continued use tends to desensitize the users until they no longer even feel the drug’s effects but instead need it just to chase that sensation. This reliance on the substance is referred to as a physical dependency.

On the other hand, addiction is characterized by behavioural patterns, usually the habitual use of something that may affect work, school, or even your relationships with others. Things like videogames, food, sex, and even cannabis can cause these behavioural patterns. 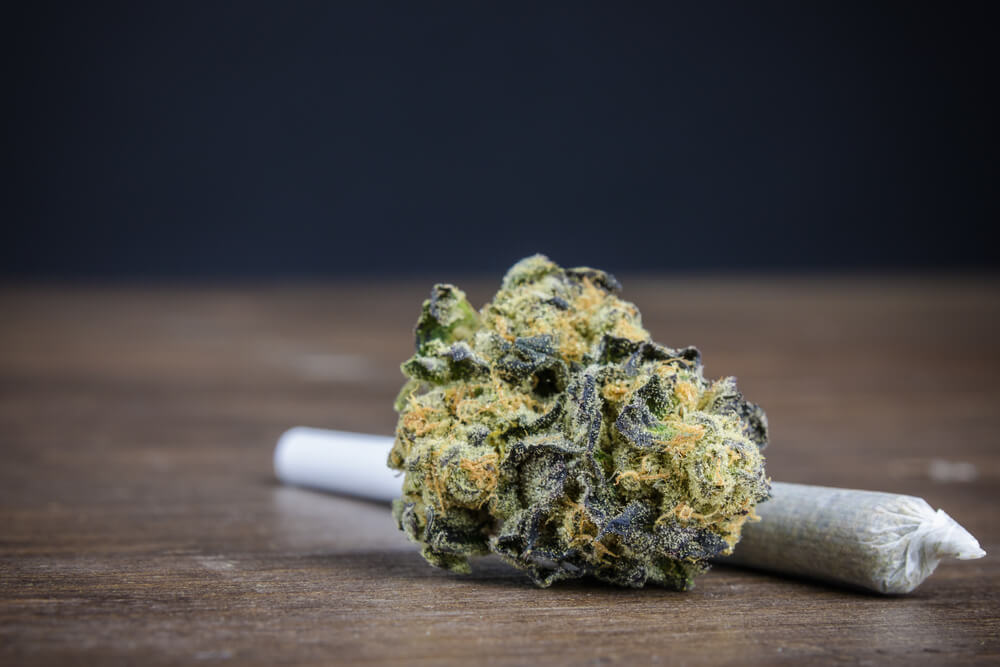 So, is weed addictive? It varies from user to user, but, for the most part, cannabis users have a 1 in 10 chance of developing an addiction. Needless to say, the conditions aren’t equal for each person, and the age of the person smoking actually has a lot to do with it.

It’s important to distinguish between other substances and weed because there is no real physical dependency on weed. For the most part, the dependency is psychological. With THC, specifically, the psychoactive effects are pleasurable and fun, which prompts many users to seek it time and time again.

Since THC interacts with your brain to make you feel good mentally, some users become dependent on this sensation and will ingest higher doses to generate the same effects.

What’s more, marijuana addiction probably isn’t as nearly addictive as you might think. And yes, we know, most weed users would claim the same in promoting their favourite herb, but, compared to many other drugs like alcohol, heroin, or even sugar, marijuana isn’t nearly as harmful.

In other words, you are less likely to develop a dependency on weed than you are any of the substances mentioned above. That said, it’s still crucial to practice moderation and ensure that you are using weed responsibly.

As we mentioned earlier, the likelihood of developing a cannabis addiction falls largely on the individual themself, more importantly, how old they were when they first started using it. That said, people under the age of 25 years-old who use marijuana are more likely to develop an addiction than those who have started using marijuana after 25.

This difference is because the brain’s prefrontal cortex, the portion of the brain responsible for rational thinking, doesn’t fully develop until the ripe age of 25. Generally speaking, the younger the person is under 25, the greater the risk of developing marijuana use disorder, a term coined by medical professionals to help describe the range and severity of marijuana addiction.

As far as how weed prompts addiction, it’s a bit more complex subject. One of the main reasons cannabis can be addictive to people under 25 is that cannabis tends to alter the brain’s neural circuitry, which is more intense when the brain itself is still in its developmental stages.

According to researchers at the National Institute on Alcohol Abuse and Alcoholism, “people with heavy cannabis use had abnormally high connectivity in brain regions important for reward processing and habit formation.” In other words, this means that these changes could potentially be permanent to a still-developing mind.

Brain wiring aside, the actual effects of weed and the degree of use may also play a role in developing marijuana use disorder. One of our bodies’ main systems that the cannabinoids from weed interact with is called the endocannabinoid system.

This system is responsible for regulating chemical messengers and neurotransmitters like dopamine, also known as the “reward” chemical. In fact, dopamine is tied to most if not all pleasure-inducing activities like sex, eating delicious food, or even winning a game. Not only that, but dopamine also helps to regulate our learning abilities, our motor skill, and our emotions as well. 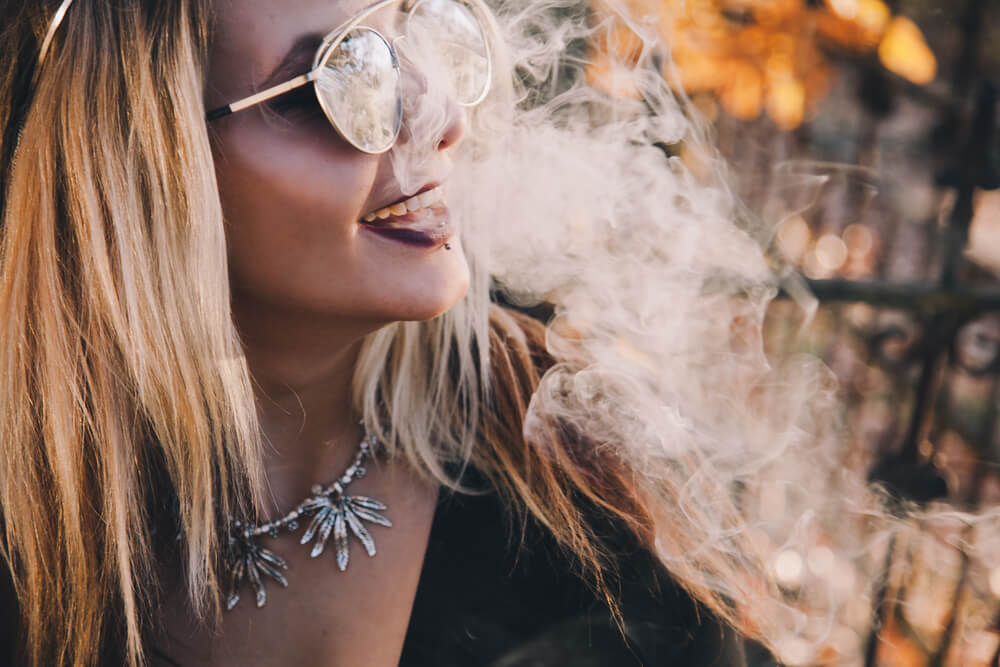 The THC in cannabis is known to overload us with dopamine, making everything seem great and fun. While it is amazing in the short run, a constant overflow of dopamine can desensitize us to it and make it hard for us to properly process pleasure, causing us to use weed more frequently to re-live the sensation.

In other words, the more desensitized your body becomes to THC, the more of it you’re going to need to produce the same effects. This realization is what prompts many users to take a step back and assess whether it’s time to take a tolerance break to bring their tolerance back to a more reasonable range.

So, if you’re a smoke weed everyday kind of person, this is particularly crucial to keep in mind. However, like we said, as long as you’re responsible and have the perspective to monitor your usage and intake, it shouldn’t pose much of a problem.

Are There Any Withdrawal Symptoms?

Because there is a chance for users to develop a psychological dependency on weed, there is also a chance to develop weed withdrawal symptoms.

That said, if you decide to stop using weed, it takes on average about 4 to 6 weeks to fully rid your body of THC and reset back to normal, so you may experience some withdrawal symptoms, which may include:

How to Avoid Marijuana Addiction 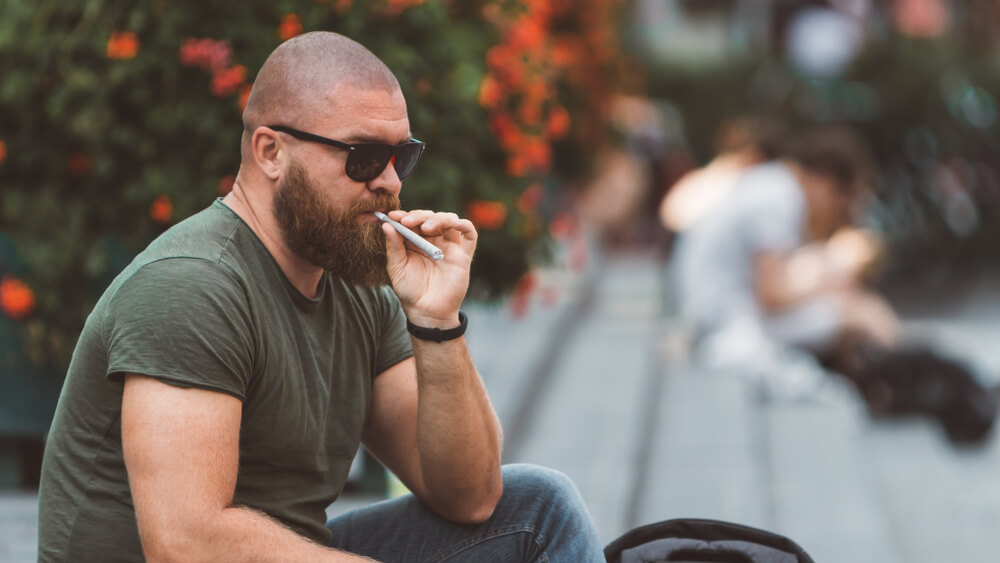 To keep things plain and simple, weed use should be done in moderation, as we’ve repeated throughout this post.

In this sense, while it may be fun, if you’re a smoke weed everyday type of person, you are significantly increasing your likelihood of developing a dependency. So, spacing your marijuana use out can not only help curb the chance of addiction, but it can also help to intensify the effects as well.

With this in mind, below, we will outline three simple ways to avoid/treat a potential weed addiction:

Taking a tolerance break is likely one of the most effective methods for combatting and keeping weed addiction at bay.

Not only will it eliminate the remaining THC in your system, but it also helps to reset your weed tolerance level to a more reasonable level. So, in this way, as we said before, it will help intensify the effects of your next smoke sesh once you’ve taken a bit of a break.

Tolerance breaks are also a great time to take a step back and reflect on whether you think your weed consumption habits are entirely healthy and make any necessary adjustments to ensure that you are as responsible a toker as possible.

Whether you’re battling weed withdrawal symptoms or trying to find a better bud balance, establishing healthy lifestyle habits, such as a well-rounded diet, staying hydrated, and exercise are excellent places to start.

We’re not saying that you need to train for a marathon or take on some weird fad diet. Still, exercise is an excellent way to release natural dopamine and will help you feel more alert and energized. Coupled with a diet consisting of healthy servings of fruit and veggies, and you’re on your way to feeling so much better!

If you feel as though your weed dependency has gotten to a point where it’s affecting your professional, family and other relationships, there’s no shame in asking for help. In fact, it’s one of the most responsible and respectable things you can do for yourself.

Some tokers may turn to weed as a method of self-medication to help regulate their mental health conditions, including anxiety, depression and other mood disorders. However, this act can take a bad turn when it develops into a dependency to feel ‘normal.’

If you feel that things have taken a turn in this direction, reach out to a loved one or get in contact with your doctor or psychiatrist. Having a strong support system is essential in turning things around and setting out on the right path.

Whether your marijuana use is for recreation or medical purposes, it’s important to space your sessions outs with tolerance breaks in between.

However, this isn’t to say that you shouldn’t moderate your intake. While not as severe as other substances, weed addiction and weed withdrawal symptoms are unpleasant to experience.

All in all, it comes down to keeping a close eye on your weed habits and practicing moderation. As cliche as it sounds, it’s all about balance. There’s nothing wrong with sparking up some of your favourite bud, so long as you do so responsibly and with proper spacing.

Additionally, make sure to keep up a healthy lifestyle of eating right, exercising and staying hydrated.

If you feel like things are taking a turn towards dependency, reach out to a family member or loved one and seek help.