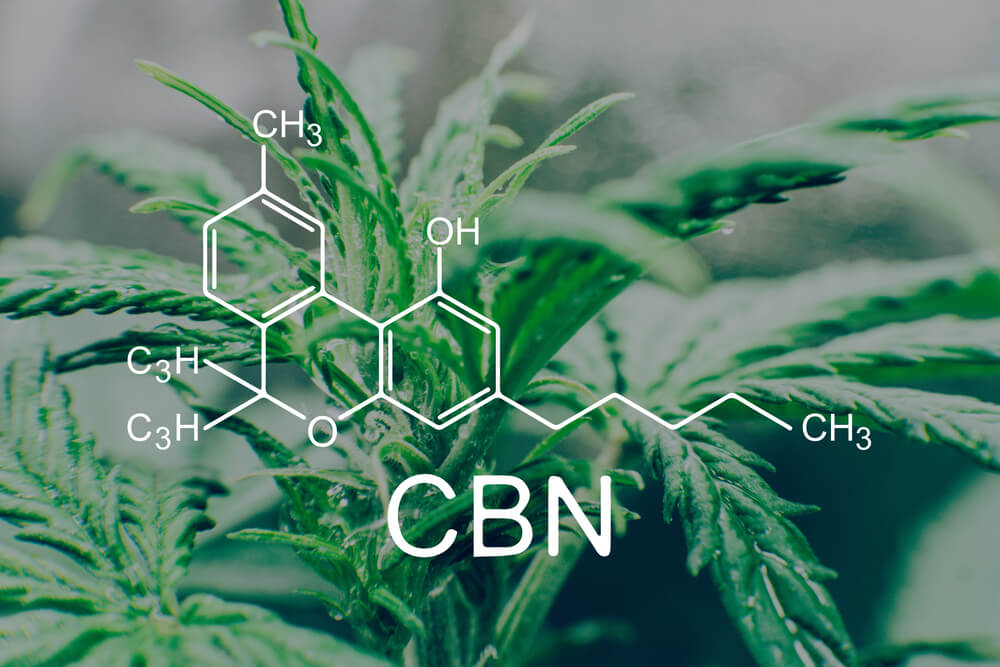 Move over cannabidiol (CBD); cannabinol is the new talk of the town!

Cannabinol, also known as CBN, is a minor cannabis cannabinoid that’s picking up steam as another super-charged medical compound found within weed. A non-intoxicating and non-psychoactive compound, CBN is present in high amounts in older cannabis and could add to the already long list of medical benefits that weed already offers.

Although its benefits and effects aren’t as well known as its more popular cousins, medical research is already ramping up to unlock more of its gated secrets.

If you’ve never heard of CBN before and are interested in learning more about what it is, how it’s made and what it can do for you, read on!

What is CBN? What Does it Do? 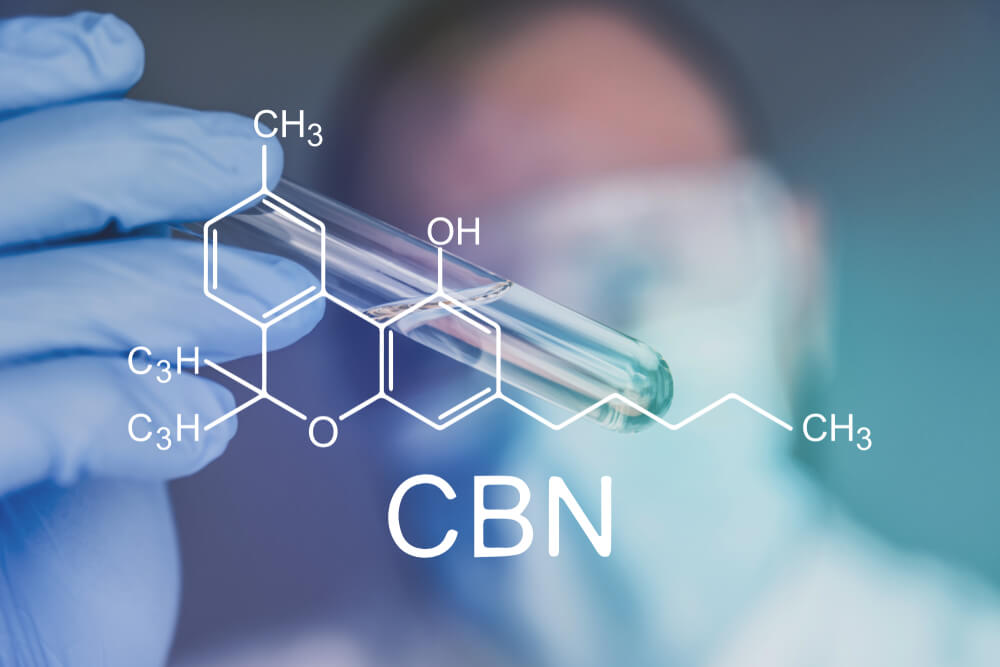 Cannabinol (CBN) is a lipid compound derived from the cannabis sativa plant. Cannabis is packed with dozens of these compounds—known as cannabinoids—each with its unique properties.

THC (tetrahydrocannabinol) and CBD (cannabidiol) are the plant cannabinoids most abundant in cannabis and are the most widely known.

THC is the main component that causes the psychoactive effects associated with cannabis use (read: it gets you stoned); CBD, on the other hand, is non-psychoactive and is used for its mood-regulating and pain-relieving benefits.

CBN is a less abundant and lesser-known cannabinoid. It hasn’t been studied to the degree of its siblings, THC and CBD, but the research that has been done shows promising benefits for pain, inflammation, sleep, and more.

Here’s What Know About CBN

While THC is still contained within the cannabis plant, it exists in its acid form—tetrahydrocannabinolic acid, or THCA. THC-A or THC-acid molecules are too big to enter the endocannabinoid system’s cannabinoid receptors, which is why eating raw cannabis won’t produce any psychoactive effects.

These THC-A molecules must first be converted to THC before they can be absorbed into the body. This conversion is done through a process known as decarboxylation (exposure to heat and light) and is usually achieved by lighting it on fire, you know, like when you smoke a joint.

When THC-A is oxidized (exposed to sunlight and air) rather than decarboxylated, its chemical structure changes, and it’s converted into CBN.

This is why THC is much more abundant in the cannabis plant than CBN—only some of the THC-A oxidizes to produce CBN, but most of the THC-A within the plant remains intact.

Because CBN is technically degraded-THC, it’s impossible to cultivate high CBN cannabis plants (unlike CBD, which is usually extracted from high-CBD hemp plants rather than regular cannabis).

How Does CBN Work?

The reason we feel effects from ingesting cannabinoids is because they interact with our own body’s endocannabinoid system.

Cannabinol exerts minimal affinity with CB1 receptors, so it’s considered weakly psychotropic and is nowhere near as potent as THC.

Some people who are particularly sensitive to it may experience mild effects but not to the same degree as THC.

Cannabinol preferentially binds with CB2 receptors, which link to the immune and digestive systems. Through this connection to immune cells throughout the body, it works on inflammatory responses and pain modulation.

CBN’s effects on these processes are similar to the effects of its sister cannabinoid, CBD. These two cannabinoids have a number of similarities, and a few differences, which we will review now.

CBD vs CBN — Benefits and Differences 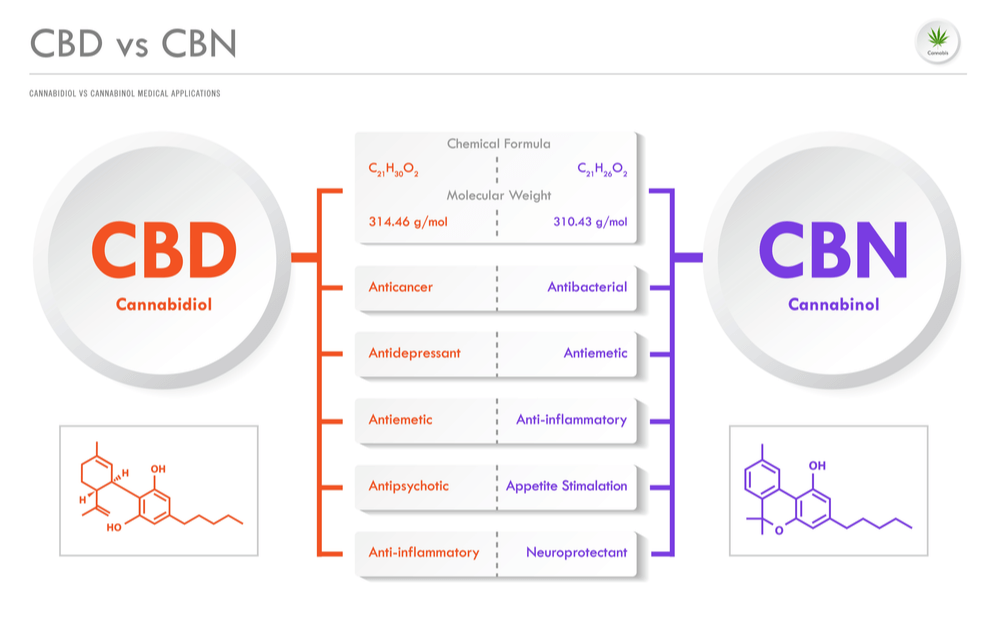 Like other peripheral analgesics such as aspirin and ibuprofen, CBN and CBD target general pain and inflammation, they are even effective against severe pain caused by chronic conditions like rheumatoid arthritis, MS, and fibromyalgia.

Given that more cannabinoid research has been done on CBD, it’s more widely used for its benefits in pain relief. It also has powerful anti-nausea and anti-emetic abilities that are especially effective on the side effects of cancer treatments.  Medical cannabis tends to be high in CBD to harness all of these therapeutic qualities.

A rat model study from 2019 showed that a combination of CBD and CBN reduced myofascial pain to a greater degree than when employed individually.

Unlike popular sleep aids such as melatonin, CBD facilitates sleep without leading to any groggy feelings the next morning.

By lowering cortisol (the stress hormone) levels, CBD promotes restfulness and sleep even for people living with insomnia.

There are CBN-specific sleep aid products available on the market, but we don’t actually have much verifiable information on CBN’s impact on sleep. One study indicates that it does have sedative effects, particularly when combined with THC. THC alone acts as a sedative, and this effect is further amplified when combined with CBN.

Cortisol is essentially the body’s alarm system, and increased levels of it can lead to insomnia, anxiety, depression, headaches, and memory problems. As we mentioned above, CBD lowers cortisol production. It also interacts with serotonin receptors, which engage with our mood and sleep processes. Through these functions, CBD provides relief for stress, certain mood disorders, and panic attacks.

However, CBN has not been shown to have a notable effect on mood.

CBD treatments are shown to be particularly effective against certain seizure disorders. The exact “why” of how CBD achieves this is still being studied, but the Federal Drug Administration has already approved CBD treatment for two rare forms of epilepsy—Lennox-Gastaut Syndrome and Dravet syndrome.

CBN may too have anti-convulsant abilities, but it remains to be studied.

According to Medical News Today, “Neuroprotection refers to mechanisms and strategies that aim to protect the nervous system from injury and damage, especially in people who sustain an injury or develop a health condition that has neurological effects.”

Studies show that CBD protects against neural damage, and offers neuroprotective abilities that could help with the symptoms and progress of a number of degenerative neurological conditions, including MS, Parkinson’s, and Alzheimer’s.

CBN’s potential neuroprotective abilities are some of the most promising benefits of this particular cannabinoid. One study showed that it was able to slow the progress of ALS (Lou Gherig’s Disease) symptoms in rats.

In addition to all the benefits we’ve already reviewed, some evidence indicates CBN could slow tumour growth.

The National Cancer Institute has stated they are investigating the therapeutic abilities of cannabinol, as well as other major and minor cannabinoids.

With cannabis research advancing alongside cannabis legislation, cannabinol is just one of many new frontiers being explored by the medical community.

Nothing discussed here is intended to provide medical advice. We simply want to share the exciting things cannabis pharmacology experts are uncovering about this wonderful plant! Dry weed might not be the best thing to smoke, but the discovery of CBN could just be its saving grace!

Most studies on the potential benefits of CBN are still in the early stages, but we’re sure it still has plenty more exciting abilities waiting to be uncovered!