Your stagnant bong water is like a neglected house plant. You don’t really notice it until it starts turning yellow, and, by the time you do, the damage has already been done.

We don’t mean to alarm you. After all, there probably isn’t a stoner out there who hasn’t used some sketchy bong water in their day. That said, while dirty bong water isn’t a death sentence, it isn’t too healthy for you, either.

Changing your water is such a simple act that we as tokers ignore it all too often because, well, we want to indulge in our favourite icky sticky! However, to keep the good (and safe) times rolling, you’re going to want to add bong water replacing to your pre-sesh to-do list.

This article will explain why you need to change your bong water and what happens if you don’t.

Why You Need to Change Your Bong Water

Essentially bongs work as a filter for your weed smoke. Cannabis smoke, just like cigarette smoke, is filled with ash, tar and other bits of combusted plant matter that can enter your lungs and cause irritation.

In other words, cue the coughing fit!

Bongs use water as a filtration system to effectively filter out all of those nasty little bits that we don’t want entering our bodies.

Over time, like any filter, your bong water can get oversaturated and require replacing. You’ll know it’s time to change out your water when you start noticing an abundance of black specks floating around and when it has a noticeably yellow tinge. The good news is that your bong is working correctly and is doing a great job providing you with clean, smooth hits.

The bad news is your water could also contain all sorts of unsavoury bacteria and algae.

Still bodies of water, bong water included, are the perfect environment for bacteria, algae, and other undesirable organisms. These microorganisms may have found their way into your bong by travelling through the air, being present on weed nugs or even injected inside your bong water when you go to take a hit.

If you share a bong with your friends, then you can only imagine all the different sources of bacteria potentially entering into your bong water! Dust, allergens, and other forms of pollutants can also fall into your bong and collect on the surface, forming a thin layer of organic and inorganic material known as a biofilm. 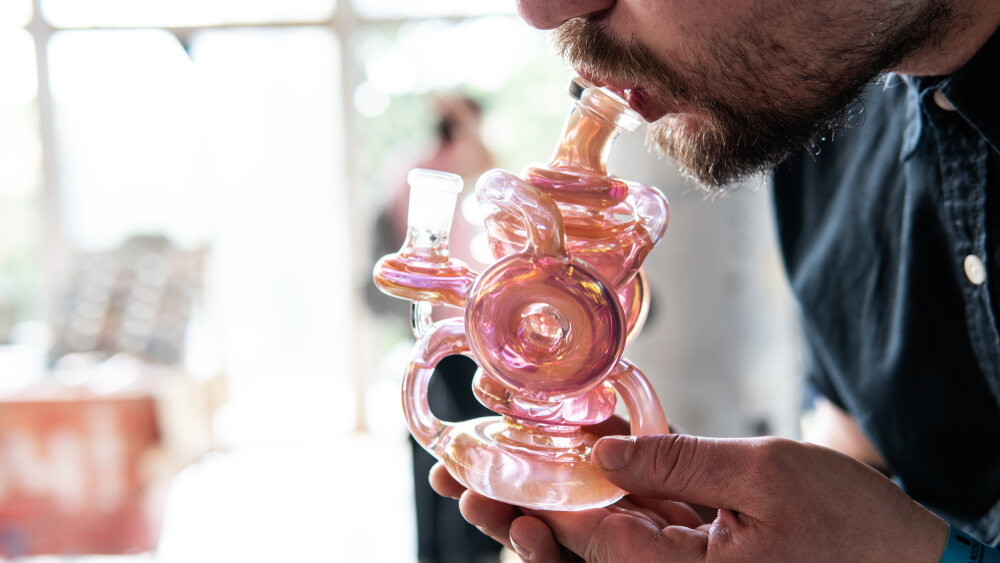 When it comes time to use your bong again, your weed smoke is travelling through that dirty bong water where bacteria and algae have the opportunity to hitch a ride and enter into your body.

While this isn’t inherently dangerous, letting your water stagnate for extremely long periods and choosing to continue using it instead of replacing it can be hazardous to your health.

Potential symptoms of using water with a biofilm on top include strep throat, Lyme disease, lupus and irritable bowel disease.

To sum it up, using extremely old and dirty bong water is not a good time.

How Often Should You Change Your Water?

While it may seem tedious, tokers should change their bong water at every opportunity possible. Glassware, such as bongs, pipes and bubblers, should be cleaned and sanitized regularly to prevent the buildup of algae, bacteria and tar on the glass’s surface.

As a general rule of thumb, you should consider changing your bong water after every sesh. If you’re extra cautious and germ averse, you can even give your bong a rinse and replace the water every time someone new sparks a new bowl.

If those two options are too frequent for you, the next course of action is to replace it before it starts to yellow and definitely before a bright sheen develops on the water’s surface. This sheen alerts you to the presence of a biofilm.

If you ever see this in your bong, give it a deep cleaning with boiling water and alcohol at separate intervals before using it again.

Do I Have to Use Water in my Bong?

You aren’t necessarily limited to using just water in your bong. You can also use sugar-free liquids such as tea, sparkling water and unsweetened juice to give your bong experience a touch of pizazz.

Tea, especially cold-brewed tea, is an excellent choice since it can give the smoke an aromatic and fragrant kick! Unsweetened juice gives the bong water a neat colour and flavoured sparkling water adds a refreshing touch.

If you don’t want to run the risk of staining your bong with tea or unsweetened juice, adding a few aromatics and herbs of choice is an easy way to spice things up. Mint, ice cubes, and some citrus peels can make for even cleaner hits, while some allspice and clove can give your bong some Moroccan flair.

The only thing you should avoid when it comes to your bong is alcohol. The alcohol fumes can combust and cause your bong to explode, sending glass shrapnel flying everywhere once you go in for a hit with your lighter.

It might sound like an extremely badass thing to do, but trust us, there’s nothing badass about losing a bong and having to sweep up its shattered remains from the floor. Not to mention, it’s super dangerous for everyone involved.

Also, it’s just plain icky a lot of the time.

If you have the chance to change your bong water, just do it. It takes less than a minute, and not only does it look better, it’ll make your smoke taste better, too. Try to replace your bong’s water every time before you decide to blaze up, and be sure to watch out for a shiny sheen on the water’s surface before you blaze up.

As long as you follow the tips laid out in this guide, you should be golden to enjoy some beautiful, bodacious bong hits.