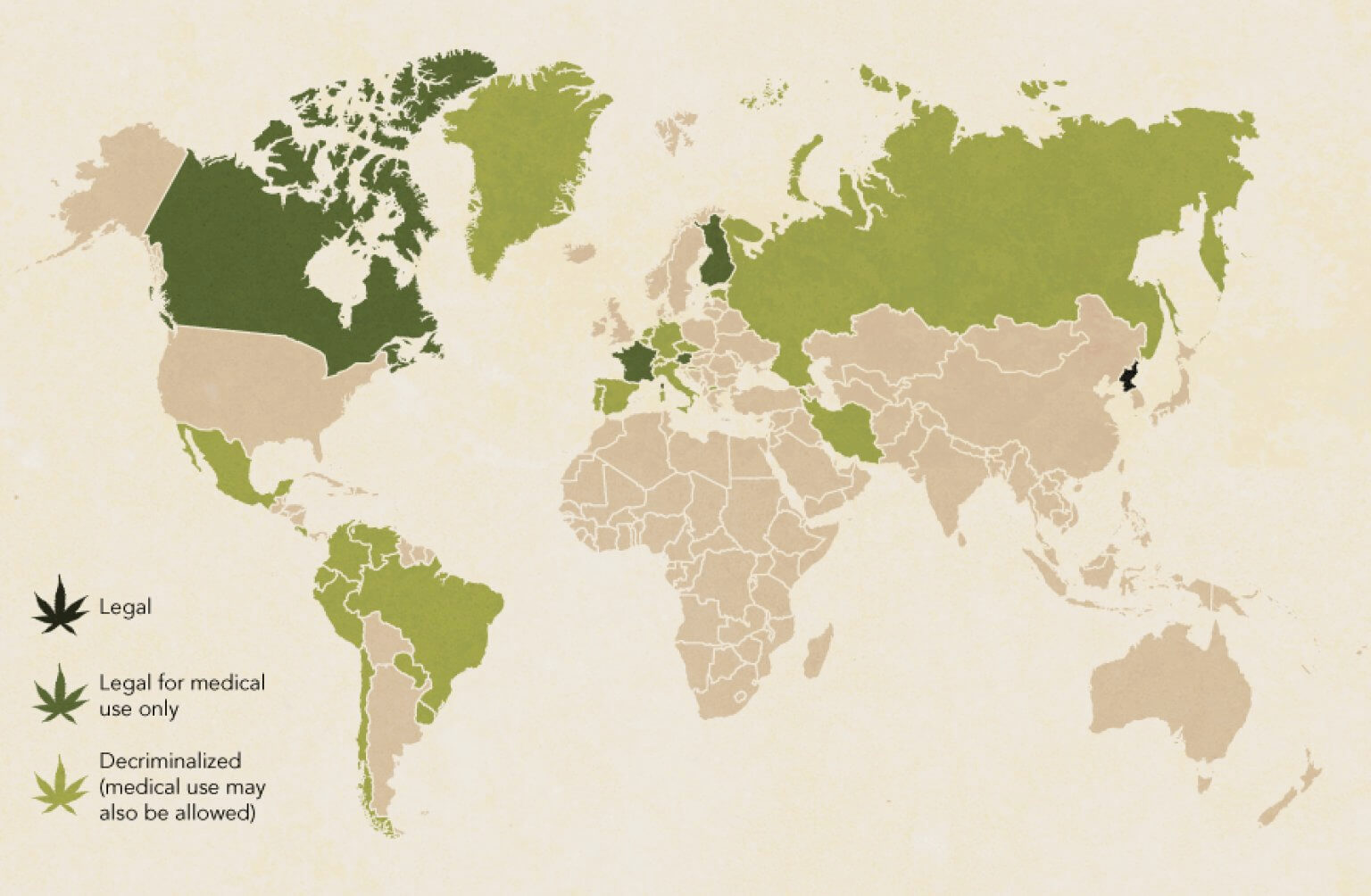 Where in the world can you light up? As the years go on, and marijuana becomes legalized and more widely available in a range of places, we’re seeing some places are going to be better than others! We have gone ahead and prepared a list of the top five places where smoking pot won’t be too much trouble!

Now, a few things to keep in mind. The only options included on this list are places in which Marijuana is either fully legal, and/or widely available. Some of the places on this list are not 100% clear on the legality of Marijuana. And enforcement rules may also be in a gray area.  However. these places made the list due to a multitude of reasons.

Locations in which Cannabis will land you in prison for its general use, will not be included on this list for obvious reasons. Those on this list have been chosen due to the quality of the bud available, the landscape/physical location, as well as the laws and culture surrounding the experience.

Which one of these countries do you want to spark up in? How many have you already been to these places? Join us for a quick journey around the world to see the best places to smoke Cannabis in as of July 2017!

To start off our list, we have a fairly new contender on the Cannabis field. Canada is a nation of vast natural beauty, and diverse cultural experiences. Medical Marijuana became available for certified patients in 2001. But has been pretty stagnant since as far as legalization goes. However, with the election of the new prime minister, Justin Trudeau (a well-known Cannabis advocate) there has been a legislative move to legalize Cannabis nationwide. There is a strong belief that by mid-2018 Marijuana will be legally available for adults from designated retailers.

Despite the current precarious legal standing, Canada has some of the highest usage rates among both youth and adults; averaging around 30% of young adults in 2015 according to the Canadian government. Cannabis use is extremely popular. As the time goes on towards full recreational legalization, Canada is going to be topping many lists similar to this one. Paring the natural beauty, culture and society, Canada is and will be an even better place to sit back, and enjoy that joint.

{Update – marijuana was federally legalized in Canada in 2018}

Next up on our list is a country on the forefront of the battle for Cannabis legalization. While Marijuana is illegal on the federal level within the United States, there are currently eight states that have legalized recreational use. Additionally, twenty-nine states support and provide legal Medical Cannabis to prescribed patients.

Until the election of Donald Trump, and his appointment of his Attorney General Jeff Sessions, Cannabis seemed to be on the track for possible federal legalization at least on some level. Despite this fact, in the states where Marijuana is legal, the federal government tends to not interfere. They allow the states to regulate and control the Cannabis industry.

Keeping this in mind, and going forward with the idea that in the aforementioned states it is legal, the U.S can provide the Cannabis user some great experiences. There are few places where you are going to find higher quality bud than in California, Maine and Colorado, world famous for what they produce.

The Cannabis industry is exploding in the United States, with more and more states providing new legislation to legalize the flower. From amazing landscapes, and stunning Cannabis products, these certain states can provide some astounding experiences for any Cannabis lover.

Cannabis is a massive illegal business in India. Some tourists businesses actually operate their hotels as the side business to selling Cannabis to tourists. While the police are strict and do periodic searches, the level of corruption and bribery between the residents and business owners keeps them involved to the point where they typically leave those who use common sense alone.

This is not a place to be smoking pot out in public, but if you want to get some of the rarest, most exquisite strains in the world, in some of the most stunningly ancient landscapes, India might be your place to go. During the holiday of Holi, a special form of Marijuana, Bhang, which is an edible form, is prepared and freely enjoyed legally by everyone. But this does not fit the set definition of Cannabis.

There are current movements to legalize smoking pot. But until then, it seems that if you’re smart about it; India is a stunning place to find ancient and rare methods of Cannabis use. The region has seen cannabis use as a major part of culture and religion for thousands of years. Taking a trip to India could provide those searching for it the experience of a lifetime.

Dubbed, “The New Amsterdam”, Spain has interesting laws and legislation considering Cannabis. For personal use, be it recreational or medical, it is completely legal IN PRIVATELY owned places and homes, etc. There is no smoking pot out in public, in bars etc.

You are also not technically allowed to share, but can smoke together, etc. But what you own and cultivate, cannot be shared with others. However, if it is a privately owned business, the police are not allowed to interfere or intrude. This has allowed the rise of “cannabis clubs” where people can go and enjoy the herb together. This is similar to the the “Coffee Shops” in Amsterdam.

Since the police cannot interfere, this is where most of the cultural aspects of smoking occur. As of the time of writing this, there are around five hundred clubs in the country. Almost two hundred are in the capital of Barcelona alone!

With a rising Cannabis industry, lenient laws, and methods to enjoy Cannabis socially, not to mention the high quality bud available, Spain is fast becoming a top destination for the Cannabis enthusiast.

Finally, to top off our list, the number one place for smoking pot is surprisingly the South American country of Uruguay. Uruguay is doing something very interesting, that we have not seen before in other nations in the modern world.

The government, in 2013 legalized personal use of Marijuana across the country. This allowed individuals to use, grow and share Marijuana, anywhere. The only thing that is illegal is selling Marijuana which is because the government wants to handle that themselves. So, they regulate it and make sure that the price remains $1 a gram.

The goal of this, is to undermine the illegal cartels, etc., by providing easily accessible, legal, and extremely cheap Cannabis. The only restrictions are on the amounts that one can possess at a time. Also, everyone has to be registered. However, the amounts are very liberal and most people do not reach the limits at all.

So far, the effect seems to be very positive and effective towards the goals that they are seeking. Due to the quality, accessibility, as well as the cost, Uruguay tops our list of the best places in the world for smoking pot. It seems it may stay that way for a long while until other nations adapt and change their Marijuana policies.

The landscape of Cannabis use is rapidly changing around the world. That provides people with many new and exciting places to explore and enjoy this magical herb. How many of these places have you been to? Do you have other suggestions of the best places to enjoy smoking pot? This world is an amazing place and offers us amazing things that grow straight out of the ground. It’s only proper to enjoy them in some of the best places!